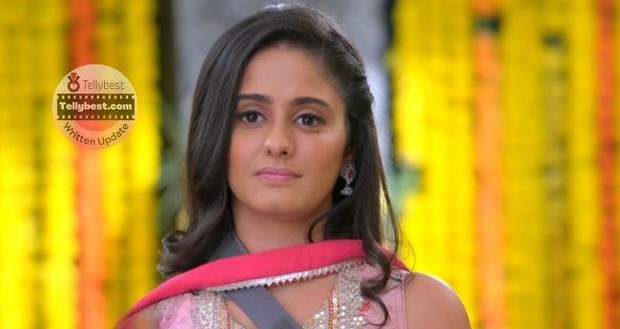 Sai gets suspicious and tells Bhavani to give Savi’s hair to her as she will do the needful.

Sonali looks curious at Bhavani’s insistence on keeping the hair while Karishma speculates that it must be to conduct the DNA test.

Sai tells Bhavani that after all these years she has not changed and still plays games with her family members.

Bhavani gets angry and accuses Sai of imposing her child upon them as theirs.

Virat sternly stops Bhavani from insulting Sai and shames Bhavani for backstabbing him.

He reminds her of the consequences of her stubbornness that separated Devyani and Harini a long time back and how Devyani became mentally ill and is still suffering.

He aggressively asks her if she wants the same for him.

Looking around for something, Virat's voice grows louder and he picks up a vase to hurt his head with it.

Both Patralekha and Bhavani forcefully stop him and ask her what he is doing.

However, Virat asks Bhavani if she knows what she is doing.

He tells her that Sai never lies and he knows in his heart that Savi is his daughter.

Telling Bhavani that Sai can never become the mother of anyone’s child, Virat asks Bhavani to swear on him never to ask this question again.

Sai feels that someone has brought her under shade on a scorching summer day and looks gratefully at Virat.

Meanwhile, Virat reminds Bhavani of the depressing time they faced when Sai and Vinayak left the house and he lost them to the accident.

Bhavani remembers the agony that Virat has gone through and promises never to raise this question.

Virat also asks Bhavani to apologise to the mother of his daughter.

However, Bhavani refuses to apologise and tells them that Sai is inauspicious to this family and she will never apologise to her.

Seeing Bhavani walk out, Sai comes forward and thanks Ashwini for welcoming her daughter and takes her to leave.

However, Ashwini tells her that it is inauspicious for daughters to go without eating on the day of Karthik Poornima.

On Virat's insistence, Sai tells them that she will wait for Savi to finish the food but cannot join them as it will not be right for her to eat here.

Virat also ignores Vinayak while feeding Savi which he feels sad about.

In the meantime, Savi asks Sai to join them too as she cannot eat food without her.

After a lot of insistence from Savi and others, Sai sits down at the table.

Later, Savi asks Virat and Sai to eat with her from the same plate.