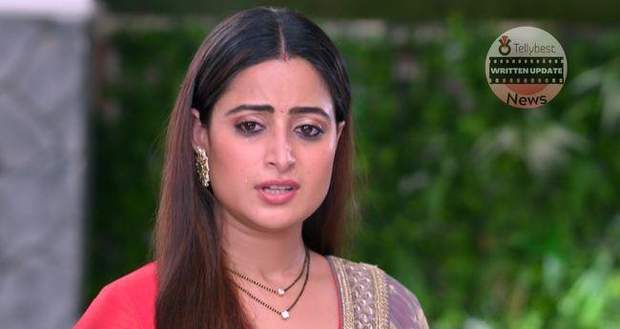 Today's Ghum Hai Kisi Ke Pyar Mein 20th October 2022 episode starts with Sai telling Patralekha that the love that is acceptable for a child becomes a source of resentment if it is for one husband.

She also suggests to start living in the present and wishes them happiness and togetherness.

Meanwhile, Vinayak tells Sai that he would like to spend some time together with Savi.

After a while, Savi and Vinayak show each other their pens and that whatever they write with this pen will come true.

In the meantime, Sai has an interview scheduled and asks Usha to not disturb her for another half hour.

Meanwhile, Vinayak and Savi use the opportunity and leave.

After a while, Patralekha comes to pick up Vinayak and Usha goes to call them but gets shocked to see the room empty.

Meanwhile, Savi tells Vinayak that the people who get lost find themselves at the Fair.

Later, they take the auto to go to the fair while Savi makes a placard for Vinayak and herself.

The auto driver is keenly watching their activities while Vinayak asks Savi if he will find his parents or not.

In the meantime, Sai and Patralekha find Savi's note about going to search for Vinayak’s parents and gets stunned.

Just then, Vinayak gets a call from Patralekha but he disconnects the call feeling scared of being scolded.

After a while, Virat is briefing his team about the Dusshera duties when he gets a call from Patralekha informing him about Vinayak and Savi leaving the house alone and not picking up their phone.

Virat is shocked to hear the news and tells Patralekha to calm down as he will find them.

He asks Kadam to trace the location while he calls Vinayak’s number.

Meanwhile, the auto driver takes another turn when Vinayak realises that this route will take them to Virat’s police station.

Vinayak asks the driver why is he taking them on this road.

The auto driver explains to the children that it is not safe to go to the fair alone and that is why he is taking them to the police station.

Turning around, the auto driver is shocked to see the Rickshaw empty.

Meanwhile, Vinayak asks Savi to call him “Dada” as he is elder than her.

Later, Vinayak questions the auto driver about Vinayak’s and Savi’s location while Sai and Patralekha arrive at the police station.

As Savi asks Vinayak how they will reach the fair when Vinayak realises that he has left his phone in the auto-rickshaw.

After a while, Vinayak and Savi see Ravan Mandali and follow them to the fair.

In the meantime, Bhavani is cursing Savi for taking Vinayak to the fair while Omi drives them to the park.

Later, Virat instructs his team to send Savi and Vinayak photos to the team at Kastoorchand Park.

© Copyright tellybest.com, 2022, 2023. All Rights Reserved. Unauthorized use and/or duplication of any material from tellybest.com without written permission is strictly prohibited.
Cached Saved on: Monday 21st of November 2022 05:14:55 AMCached Disp on: Thursday 1st of December 2022 01:21:46 AM