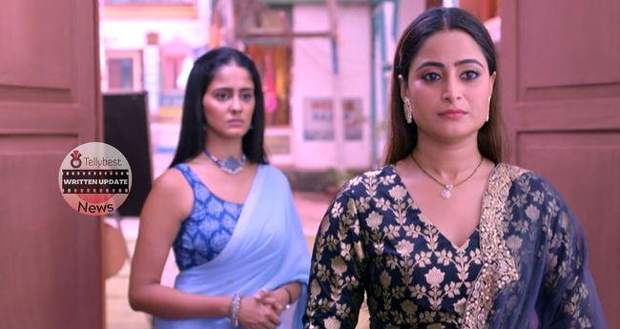 Patralekha tells Sai that she is really happy to see her alive and asks her what is Jagthap doing here and why is he so friendly with Savi.

Sai feels offended and tells Patralekha to not interfere in her life as she is keeping to her life.

She also tells her that she doesn’t have to worry about her status in Virat’s life as she is not coming back to them.

Meanwhile, Patralekha calls Ashwini to update them about Virat.

Ashwini wants to talk to the doctor to thank her for saving Virat but Patralekha tells her that she is not here.

Later, Mohit comes to Patralekha asking her to tell the family about Sai but Patralekha tells her that she needs to talk to Virat about keeping Sai’s existence a secret.

Meanwhile, Sai is exercising Vinayak’s leg when Patralekha comes in and talks to Savi about her father.

Savi tells Patralekha that she does not know about her father.

Later, Sai takes their leave while telling them that she is a call away if there is an emergency else she will come later to check on Virat.

After a while, Virat wakes up and remembers Sai in Jagthap’s arms.

He comes out to see Jagthap holding Sai’s hand and asks Sai what is Samrat’s murderer doing here.

Sai refuses to answer him but Virat takes matters into his hand and tells Jagthap that he will not forgive him even if Sai could and shoots him in the chest.

With that Virat wakes up from a dream and his wound begins to bleed again.

On the other hand, Harinee is going to a birthday party when Shivani tells her to take the car with the driver.

Harinee does not like being controlled and tells them that she has become a prisoner in this house with her every action being monitored.

Bhavani gets angry to hear Harinee’s complaints and orders her to go to her room.

Later, Sonali reminds Bhavani of Patralekha’s upcoming birthday while Bhavani decides to plan something nice for Virat and Patralekha.

Elsewhere, Sai tells Patralekha to get some medicines.

Virat captures her hand and asks her why was Jagthap holding her hand.

Sai fights to release her hands telling Virat that she is only his doctor and will not answer any personal questions.

Virat asks her when will she give her his answers while Sai tells her that she will never answer his questions and neither is she asking anything from him.

© Copyright tellybest.com, 2020, 2021. All Rights Reserved. Unauthorized use and/or duplication of any material from tellybest.com without written permission is strictly prohibited.
Cached Saved on: Saturday 1st of October 2022 09:32:15 PMCached Disp on: Sunday 2nd of October 2022 12:19:50 AM