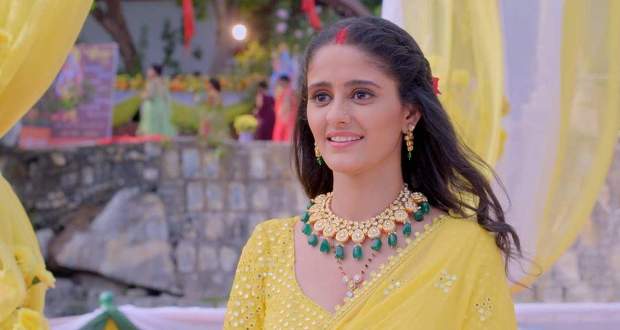 Virat points out how the whole family has always been making fun of Shivani’s life and have been judging her.

However, Bhavani dismisses Virat’s attempt of trying to soften her heart and declares that she will not let Rajeev and Shivani marry each other after what has happened in the past.

Omi drags Shivani away from Rajeev when he holds onto Shivani’s hand not wanting to let it go.

As Shivani screams in pain, Rajeev lets go of her hand while Shivani requests Omi to release her from his grip.

Rajeev declares that he will not give up until the whole family agrees to let him marry Shivani.

Hearing this, Omi gets angry and throws a stone aimed at Rajeev which hits a stove leading to the spreading of fire in the venue.

Rajeev jumps to help others along with Virat and Sai while Shivani rushes toward Rajeev to check on him.

A burning pillar almost crashes on Sai but Virat saves her at the end moment making her hug him in fear.

Meanwhile, Shivani gets near the cylinder unknowingly which is about to explode from the fire.

Rajeev jumps in to save her and gets injured himself during the process.

Sai and Virat rush in to save Rajeev while Shivani wails for her love as he lies still on the ground.

Later, at the hospital, Sai and Virat thank Rajeev for saving Shivani’s life and assure them that they will help in their marriage.

While Pakhi instigates Bhawani against Sai, Sai enters the house with shopping bags for every member and announces that they are gifts from Virat.

The family members receive a message from Virat and are shocked to discover that Virat is arranging the wedding of Shivani and Rajeev.