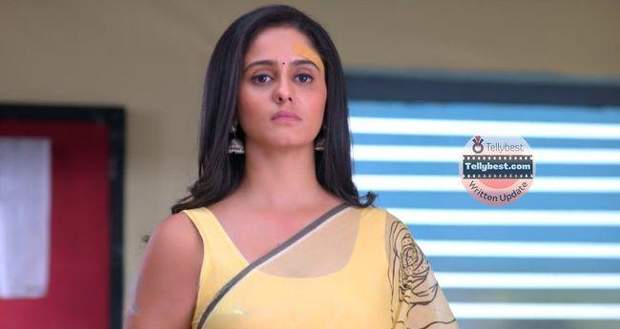 Today's Ghum Hai Kisi Ke Pyar Mein 21st December 2022 episode starts with Virat angrily telling Patralekha that Ashwini and he have particularly told her that she will be more comfortable in the guestroom but she did not listen then and now risking her life like this.

Patralekha angrily tells him that it does not concern him and he should leave her alone.

Patralekha jerks Virat's hand away while Vinayak comes to offer his help.

Later, Vinayak calls Sai and tells her to come home soon as Patralekha is not well.

Meanwhile, Patralekha is venting her anger on Virat for leaving her behind to die when she most needed him.

Virat tries to tell her that he did not know that she was on the bus.

However, Patralekha tells him that he has proved time and again that Sai is more important to him than her.

Later, she asks Virat to leave or else she will kill herself and cries for getting out alive.

Just then Pulkit comes there and seeing Patralekha’s condition tells everyone to leave the room.

After a while, Virat is surprised to see Sai at his door in the mid of the night.

Bhavani and others are equally shocked to see him.

Sai tells him about Vinayak’s call and offers to check up on her.

However, Virat tells Sai that Pulkit is here and Patralekha is Pulkit’s patient and he will take care of her.

He also tells her that he does not want Sai to be around Patralekha which causes more stress to him.

After a while, Virat is sitting alone when Ashwini comes to him with a cup of coffee.

Virat is feeling hurt and dejected at Patralekha’s behaviour while Ashwini tells him that love is like that, it is not just shown but is to be felt.

She also tells him that there are serious wounds on Patralekha’s body that only he can heal.

Ashwini tells Virat to take away Patralekha’s fear and security.

Virat tells her that it is beyond him to understand what should he do to not hurt Patralekha and not keep his promise.

On hearing Patralekha's need and demand for love, Virat tells Ashwini that he does not love Patralekha nor can he love her the way she wants as he cannot love another.

Elsewhere, Sai has come to a decision and tells Usha that she has to find clarity about what she needs to do.

The next morning, Virat is preparing breakfast for Patralekha and tells Ashwini about the medicine that needs to be given to her.

After Virat leaves for the office, Bhavani taunts Ashwini about showing false concern for Patralekha when her son has gone to work with Sai.

However, Ashwini tells Bhavani that she has told Virat to focus on the present and forget about the past and hope for a bright ray of sunshine that is around the corner.

Elsewhere Sai has come to resign from her job telling Virat that she cannot elevate the concerns and worries of Patralekha by working beside him anymore as Patralekha’s life is in danger due to that.