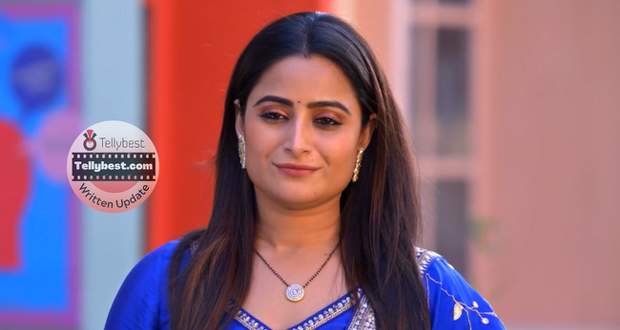 Patralekha gets offended and tells Sai that though she has not given birth to him, she has brought him up as her own and he is only her son.

Virat rebukes Patralekha telling her to finish the matter then and there.

Sai also agrees meaningfully to finish the matter there or she'll lose her patience.

Meanwhile, Sai is at the temple thanking God for returning her son.

Later, she tells Usha that their baby Vinayak is alive and living with Virat as Vinayak.

She also tells her that she cannot tell this to anyone until seventy-two hours because she has given Virat this time to tell Patralekha that Vinayak is her son.

Jagthap who is somewhere nearby overhears Sai and wonders what material Sai is made of.

After a while, Virat brings Patralekha for dinner to talk alone while Patralekha guesses his intentions.

On being told that the matter concerns Sai, Patralekha’s facial expression turns weary and she asks him why is everything important to him is related to Sai.

Virat ignores the jibe and tells her that she should not have talked to Sai so rudely in the afternoon.

He also reminds her that Vinayak wanted to call Sai “Choti Mumma” a while back but he refused.

Virat says that in hindsight he thinks there is no harm in that.

Patralekha gets shocked to hear that and angrily tells him that she has been sharing her husband with Sai for years and is not prepared to share her child with her as well.

Virat denies Patralekha’s accusation that she is sharing him with Sai.

However, Patralekha angrily gets up and tells him that a woman knows best when she is sharing her husband and if she is saying she is then he should accept that because it is true.

Virat tries to appease Patralekha but she tells him in the sternest voice that she never had any right over him.

However, as far as Vinayak is concerned she is her only mother who has brought him up and will not tolerate sharing him with Sai.

She also warns him to tell Sai to stay as far away as possible from Vinayak else she will have to be responsible for the consequences.

After Patralekha walks out, Virat gets worried and wonders how he will tell Patralekha about Vinayak’s truth when she can’t even tolerate Sai being called a “Choti Mumma”.

The next day, Virat comes to Sai’s house with Mohit to pick up Karishma who is afraid to go back fearing Bhavani and Sonali’s reaction.

However, Sai tells her that there is nothing to be afraid of as she has not committed any sin but only a mistake.

Also, her husband is standing beside her to shield her and protect her.

Mohit also assures Karishma that they will face the family together.

Karishma expresses her gratitude to Sai and Usha for taking care of her as elder sister.

Karishma also tells Mohit about Sai’s big news that she is waiting to tell everyone in seventy-two hours.

Later, Virat comes home with Karishma’s boyfriend and tells Bhavani that he has brought her a real culprit who has spread the news in the media that Karishma is abused at Chavan’s house.

Virat also tells her that he is hired hand of the opposite party sent to create problems between Karishma and Mohit so that Bhavani's name and reputation can be violated in the media and she loses the election.

© Copyright tellybest.com, 2022, 2023. All Rights Reserved. Unauthorized use and/or duplication of any material from tellybest.com without written permission is strictly prohibited.
Cached Saved on: Wednesday 25th of January 2023 09:09:08 AMCached Disp on: Wednesday 1st of February 2023 10:19:52 PM