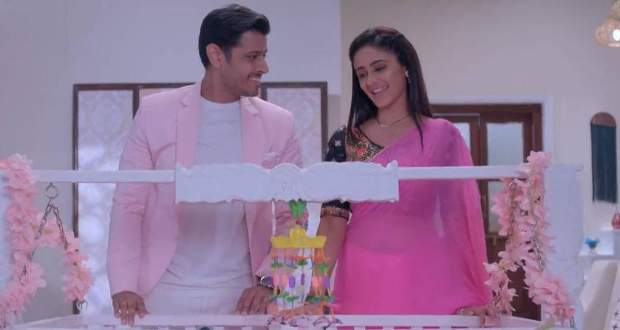 Further, Pakhi sits with Sai and drinks her coffee while initiating small talk by asking about her life.

Sai talks about her life while Pakhi praises Virat's relationship with Sai.

Just then, Virat comes there with the blankets and Pakhi asks him if he slept in a different room.

However, Virat pointedly glances at Sai and lies that he went sleep in the guest room to not disturb Sai as she is studying for her patient.

Elsewhere, Ninad and Ashwini talk about Virat distancing himself from Sai due to his trauma and that they want the couple to go for counseling.

Ashwini again tells Ninad that she is suspicious of Pakhi's overly nice behavior.

On the other end, Pakhi goes to Bhavani and emotionally blackmails Bhavani to celebrate Samrat's birthday.

Later, Shivani praises Pakhi for convincing Bhavani while she says that she has to live with Samrat's memories only.

Meanwhile, Pakhi's mother Vaishali tells Bhavani that she has intended to get Pakhi remarried for her to move on.

Bhavani gets angry while Mansi says that Pakhi doesn't want to go anywhere and will stay as her daughter-in-law.

Later, Pakhi's mother scolds her for making her say that while Pakhi says that she wants to impress Bhavani once again and get close to Virat.

Pakhi starts the celebration by lighting an earthen lamp as everyone prays for Samrat.

However, the matchstick falls on Pakhi's pallu which gets lit on fire.

Devyani notices the fire and calls everyone's attention as Virat rushes to put out the fire.

Pakhi thanks Virat and asks Sai to check his hand but he refuses saying that he's alright.

Later, the cake is brought out while Sai remembers something and stops them.

Further, Sai reminds them how Virat and Samrat were a pair of 'Jai and Viru' and praises Bhavani always supporting the duo.

Sai takes Devyani's help and brings out something that is covered and tells Virat to unveil it.