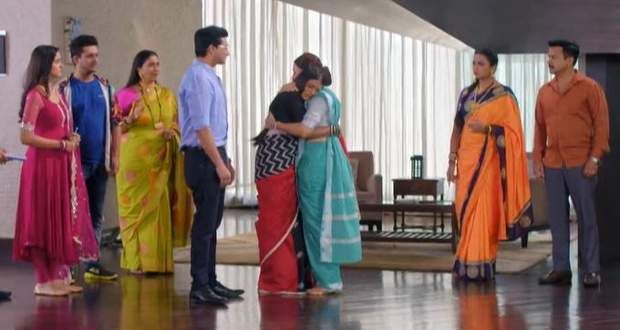 It becomes a joyous moment for the Chavan's when Bhavani hugs Devyani.

Meanwhile, when Pulkit tries to get Bhavani's blessings, she refuses him to touch her feet and tells him she has accepted Devyani and not him as his son-in-law.

Pulkit politely replies to Bhavani that he is glad and satisfied with the thought that she has accepted Devyani again and he is happy with it.

Further, Bhavani gifts Devyani jewellery and accessories as a ritual, and Ashwini carries out the remaining rituals.

After some time, everyone enjoys the special lunch made by Sai.

On the other hand, Sai asks Pulkit to feed Devyani with his own hands.

Later Pulkit thank Virat and Sai for bringing this special day into their life.

On insisting by Ashwini and Pulkit, Virat feeds Sai with his hands which makes Patralekha jealous of Sai.