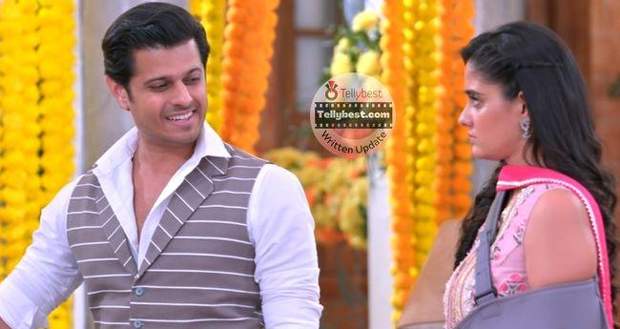 Today's Ghum Hai Kisi Ke Pyar Mein 21st November 2022 episode starts with Savi asking Virat and Sai to feed her together while the rest of the family looks uncomfortably at Patralekha.

Sai and Virat's hands collide with each other while Sai recalls one of their happy moments in the past when Virat fed her.

Meanwhile, Vinayak teases Savi saying she cannot eat spicy food while Savi tells him that she can eat it.

Soon they begin to compete in eating spicy food and soon they are in tears from the pain of spices.

Virat gets worried and gives Savi water to drink and something sweet.

Meanwhile, Vinayak is also in pain but Virat is unaware of his pain and even did not hear Patralekha’s call to pass water to Vinayak too.

Virat feels guilty and feeds both the children together and tells them both that from now on no one will eat spicy food.

After a while, Ashwini and others bring a lot of gifts for Savi which makes Sai uncomfortable.

Ninad’s gift of the iPad sparkles Savi’s eyes but she tells him that she cannot accept it without Sai’s permission.

Ninad looks at Sai who tells him that she keeps Savi away from these things.

However, Virat taunts Sai saying she should not object to taking it from family when she accepts it from strangers.

Meanwhile, Ninad tells her that his gift is connected with Virat’s gift.

Later, Virat gives Savi an admission form to Vinayak’s school and tells her that soon she will also be studying there.

Sai does not like this and asks Virat to talk in private.

Sai tells Virat that he cannot take Savi’s life decisions without consulting her while Virat tells her that there is nothing to consult as Savi needs formal education and he is providing for that.

He even tells Sai that he understands that her financial condition must have stopped her from sending Savi to school but now he is here and will take care of the expenses.

Sai feels offended and questions Virat for thinking that she has not cared for Savi’s education and challenges him to organise the interview the next day.

Virat agrees to it saying that they will find out tomorrow how much Sai has focussed on Savi’s education at which she is so proud.

Later, Sai comes inside to get Savi when Ashwini presents her with the pendant that she has bought for her for giving birth to Savi.

Sai refuses the gift telling her that she has done no favours in birthing Savi.

Sai also reminds Ashwini of her attitude in the past when she told her to not cross her limits.

Ashwini feels guilty and sad at her rudeness but Sai tells her that she understands her anger and that she does not feel worthy of the gift.

Sai also tells her that as Savi’s grandmother she is not obliged to give her anything but if she is giving it to her as her mother then that is a different matter.

© Copyright tellybest.com, 2022, 2023. All Rights Reserved. Unauthorized use and/or duplication of any material from tellybest.com without written permission is strictly prohibited.
Cached Saved on: Monday 21st of November 2022 11:20:24 PMCached Disp on: Tuesday 29th of November 2022 09:45:27 AM