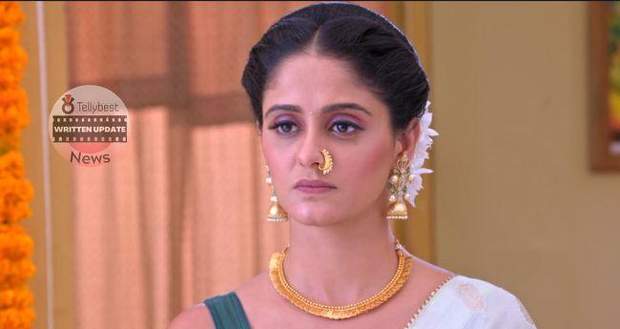 Today's Ghum Hai Kisi Ke Pyar Mein 21st October 2022 episode starts with the Ravan Mandali entering the fair along with Savi and Vinayak who are delighted to see the fair.

After a while, Virat, Sai and Patralekha also arrive at the fair and worry about finding the kids in such a crowd.

Meanwhile, Savi and Vinayak let go of their desire to eat yummy condiments to search for their parents.

Afterwards, Patralekha calls Bhavani to find out how far they are.

Bhavani assures them of being near and that she has activated her party workers too to find the children.

Later, Savi and Vinayak meet a couple who tells them to use the help desk to find their parents.

At the helpdesk, two children are already waiting for their parents whose announcement is being made on the mike.

Savi and Vinayak become hopeful that people at the help desk will also make an announcement for their parents.

Just then, a woman comes to those children to fetch them to their parents, telling them they have sent her.

The children innocently go with her while Savi and Vinayak also follow her hoping that they would know about their parents too.

On the way, the woman offers the kids juice which they drink without thinking.

Later, the woman guides them to the deserted parking where the car is waiting for them.

Children refuse to get in the car and want to run away when they faint because of drinking the juice earlier.

Meanwhile, Virat, Patralekha and Sai are searching the fair for the children and getting more worried.

In the meantime, Savi and Vinayak realise that the woman is kidnapping the children and hiding to save themselves.

Savi decides to call some adult to seek help in saving the children when she herself gets spotted and taken forcibly into the car.

Elsewhere, Sai makes an announcement at the helpdesk for Vinayak and Savi to come to the help desk while Virat finds out that two children are missing from the help desk.

Vinayak becomes hopeful to hear Sai’s voice and thinks of a way to save Savi.

Seeing a wooden plank with nails gives him an idea and he throws it in front of the car to puncture it.

Later, he stealthily goes around the car and calls Patralekha using the kidnapper's mobile but gets caught.

Patralekha and Sai rush to the parking area to save the children.

Sai falls down while running but Patralekha carries on.

In the parking, Patralekha spots the kidnapper's car and stands in front of it to stop it.

However, the kidnappers ruthlessly run over the car over her and run away.

Just then Sai comes looking for the children and is shocked to see Patralekha lying on the road.

© Copyright tellybest.com, 2022, 2023. All Rights Reserved. Unauthorized use and/or duplication of any material from tellybest.com without written permission is strictly prohibited.
Cached Saved on: Monday 21st of November 2022 06:09:07 AMCached Disp on: Monday 5th of December 2022 12:21:46 AM