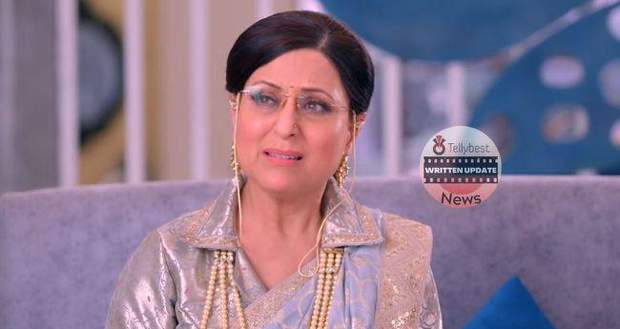 Usha tells Sai to eat something while Savi shows Sai her drawing that she has drawn for Virat and talks about meeting him tomorrow.

Later, Patralekha asks Virat why has he not told her about Sai.

At home, Sai shouts in anger at Virat for coming back into her life and creating ripples in her peaceful existence.

Meanwhile, Virat tells Patralekha that he was in shock himself and there was no time.

Patralekha tells him that she deserves to know if he harbours any feelings for Sai.

In the meantime, Sai tells Usha that Savi’s desire for a complete family has solidified after meeting with Virat.

However, Usha tells her to forget Savi for a while and share her feelings with her on seeing Patralekha and Virat together.

On the other hand, Virat tells Patralekha that there are many questions in his mind about why Sai did not come back to him when she was alive and that they have lost Vinayak forever because of Sai while she is living a content life in Kathkauli with her daughter.

On being asked, Virat tells her that he does not know about Savi’s father but he has seen Jagthap with Sai.

Elsewhere Sai tells Usha that Virat is angry at her for not calling him and accuses her of having a relationship with Jagthap.

Sai is disheartened to hear Virat’s accusation and worries about Savi who is making plans to meet with Virat.

Usha tries to reason with Sai saying Virat misunderstood the situation after seeing her with Jagthap as he still loves her.

Sai mocks Usha’s belief and tells her that Virat never loved her.

Sai says she was just a responsibility to him with who he got attached after spending years with her in the same room but his true love is Patralekha.

Usha suggests talking to Virat to get answers from each other and asks her to think about Savi.

She also tells her to tell Virat that Savi is his daughter.

Sai complains to God for sending Virat back to her life through Vinayak and now Savi is the one who will suffer.

Elsewhere, Patralekha wonders where their relationship will stand now that Sai is back.

However, Virat assures her that nothing will change in their relationship.

Sai also tells Usha that she does not love Virat anymore.

Later, Virat tells Patralekha that they will leave for Nagpur tomorrow and there is no need to tell anyone at home about Sai being alive.

Meanwhile, Sai also tells Usha that she is dead for Virat and his family and he has a new family now and for that reason, she cannot tell Savi about Virat.