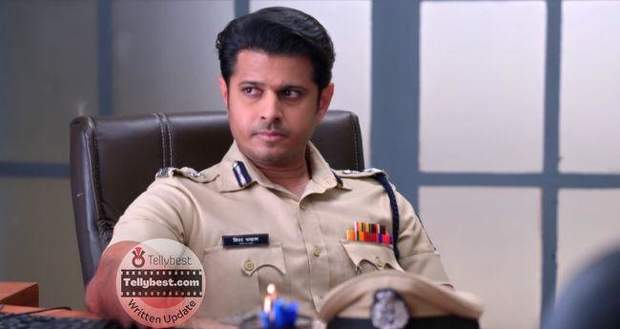 Today's Ghum Hai Kisi Ke Pyar Mein 22nd December 2022 episode starts with Sai telling Virat that Patralekha’s insecurities have increased to the level of life and death so it is better she resign.

Meanwhile, Virat reminds her of the reason for taking this job while Sai tells him that sometimes one has to choose between right and necessary and she is choosing necessity over right.

Sai hands over the resignation letter to Virat telling him to accept it so she can serve the notice period.

Meanwhile, Sai, Usha and Savi are in a restaurant where Savi asks to go to meet Virat but Sai distracts her with a treat of Pani Puri.

However, Sai’s mind wanders to Virat who made no attempt to stop her from resigning.

In her anger, Sai eats lots of Pani Puri one after another and tears start to flow from her eyes.

In the meantime, Chavans have organised a veneration at the house where Virat presents Patralekha with tickets to Khandala.

However, Patralekha refuses to go and tells Vinayak to convey to Virat that he can go with his other family if he desires to go anywhere.

Later, Bhavani berates Virat for being inconsiderate and having no tact about appeasing a wronged wife.

She tells him that to appease Patralekha he will have to remove the insecurities and fear that Patralekha has faced.

Virat looks puzzled not understanding Bavani’s meaning while Bhavani tells him that she is talking about Sai.

Virat burst with frustration and tells Bhavani that he is tired of being accused of having feelings for Sai and assures them that he did not know that Patralekha was on the bus.

He asks her what will it take for him to prove his innocence.

Bhavani tells him that for a wife it is a very big thing that her husband gives more preference to other women.

She tells him that if he wants to convince Patralekha then he will have to send Sai away from his life.

Virat tells Bhavani that Sai has resigned from her job today and they will no longer work together.

Bhavani becomes happy and tells him to tell Patralekha this good news.

However, Virat refuses to have any talk regarding Sai with anyone.

Meanwhile, Karishma is sitting with her boyfriend who is trying to get intimate with her but she is being uncomfortable about it.

Just then Sai comes there and tries to stop him while Karishma tells her that she is big enough to take her life decisions and asks Sai to leave her alone.

Elsewhere, Bhavani tells Patralekha that she is foolish to let the opportunity go to waste.

She tells her that she should grab the offer of a honeymoon and should start a new life.

However, Patralekha tells Bhavani that she does not want to live on false hopes and promises anymore.

Bhavani tells her that the root of her problem is Sai and that she has resigned from her job.

Patralekha is shocked to hear it while Bhavani tells her to focus on her life and go with Virat on a honeymoon and once she bears his child then he will forget Savi and Sai forever.

© Copyright tellybest.com, 2022, 2023. All Rights Reserved. Unauthorized use and/or duplication of any material from tellybest.com without written permission is strictly prohibited.
Cached Saved on: Wednesday 25th of January 2023 07:32:40 PMCached Disp on: Monday 6th of February 2023 05:52:43 AM