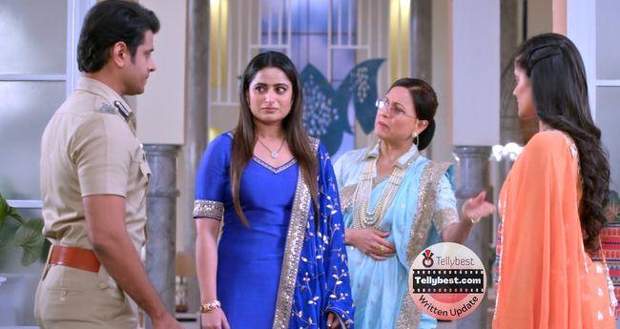 Meanwhile, Omi questions Bhavani for being the cause of Mohit’s separation.

However, Bhavani tells him that it was Karishma who was indulging in an affair and soiling her reputation.

Virat stops Bhavani and tells her that Karishma did no such thing because this person was waiting for the opportunity to get pictures of them together but failed because Karishma only loves Mohit.

Later, Virat calls his men and tells them to arrest the culprit and prepare the toughest chargesheet against him.

Meanwhile, Sonali begins to cry for her son’s loss of happiness and is saddened by losing Karishma forever whom they have said so many bad things about.

Virat tells Sonali that it is not the case and calls Karishma and Mohit inside.

In the meantime, Vinayak is surprised to see Sai at his school that too during school time, and questions her about being here.

Sai smiles at his questioning and tells him that she is here because she wants to see him and also has a surprise for him.

Just then, Savi also comes there and asks Sai if she has come to take them out on a picnic and if today is something special.

Sai shows Vinayak and Savi the tiffin that she has prepared.

Meanwhile, Karishma comes inside the room and apologizes to everyone.

Sonali, Omi immediately forgives her while Karishma says that she will not repeat her mistake ever again.

Bhavani stares at Karishma for a while but hugs her the moment she bends down to take her blessings.

She thanks Virat for solving the matter before things could have gotten worse.

Virat tells Bhavani that she should thank Sai for saving Karishma because she was the one who helped Karishma and supported her in her time of need.

Karishma tells everyone about being pregnant with Mohit’s child.

Bhavani and Sonali become happy to hear that but the joy is short-lived as she told them about the miscarriage.

Sonali is shocked to hear this news while Bhavani swoons with grief.

She asks God for punishing her and taking away the children of the family.

Virat feels ashamed to keep the truth about Vinayak from his family and Patralekha.

Meanwhile, Sai asks Vinayak to bring the clay house that was broken and tells him that she will help him fix it with magic glue.

In the meantime, Patralekha is waiting outside for Vinayak and comes inside when he doesn't come out.

At the same time, Sai and Vinayak fix the house together and it turns out to be better than it was before.

Sai tells Vinayak that things that get broken do not necessarily mean that they cannot be fixed and sometimes it breaks so that they can become more beautiful after it is joined again.

Sai also asks Vinayak if he finds this house better than the previous one.

Patralekha overhears Sai and comes inside and tells her to focus on her own child as she is there to help her son.

Sai tells her that Vinayak is like a son to her while Patralekha corrects her and tells her that there is a difference between having her own son and considering someone’s son as her own.

Later, Sai looks at the watch and tells herself that only 40 more hours are left for Vinayak to come back to her and after that, no one can take him away from her.

© Copyright tellybest.com, 2022, 2023. All Rights Reserved. Unauthorized use and/or duplication of any material from tellybest.com without written permission is strictly prohibited.
Cached Saved on: Wednesday 25th of January 2023 08:47:22 AMCached Disp on: Sunday 5th of February 2023 04:37:40 AM