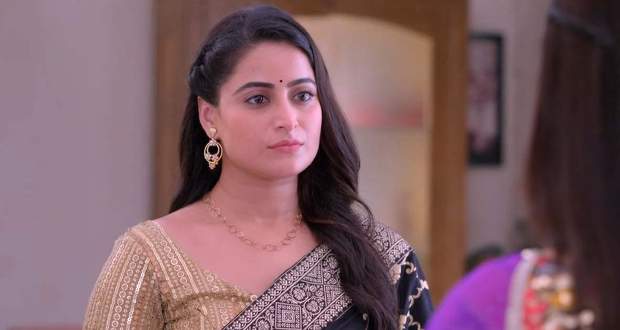 Today's Ghum Hai Kisi Ke Pyar Mein 22nd July 2022 episode starts with Sai telling Patralekha that she will have to do what she tells her.

Patralekha gets angry and calls Virat.

Meanwhile, DM Vyas is praising Virat when Patralekha’s call during the meeting disrupts it.

Sai tells Patralekha to not call Virat as he is in an important meeting.

Later Sai tells Patralekha that she and Virat have made a pact with Lord Ganesh to name their child Biyanka or Vinayak, after his name.

Patralekha tells Virat that she will only do what she wants and Sai cannot force her.

Just then Virat comes home rebuking Patralekha for spoiling the impression in front of DM.

Virat scolds both Patralekha and Sai for fighting like cats and dogs and compromising his integrity at the office.

Patralekha continues to argue while Virat tells Sai to not handle this sensitive matter so carelessly.

Patralekha feels victorious while Virat tells her that he is not saying anything because she is pregnant else he would have rebuked her badly.

Later, Virat tells Sai about being embarrassed and tells Sai that she should have thought of his reputation.

Virat also tells her to focus on their child while Sai tells him that if she will have to fight with her then she will.

The next morning, Sai has prepared food for Patralekha and is shocked to see her climbing down the stairs at speed.

Sai criticises Patralekha for running on the stairs and asks her to shift her room to the ground floor.

Patralekha asks Sai to not order her where and when she will live.

Just then Bhavani comes in asking the same question to Sai.