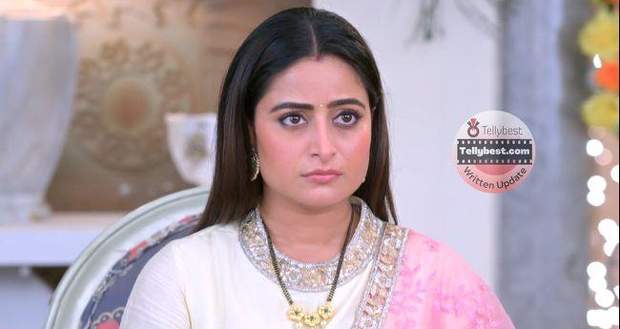 Today's Ghum Hai Kisi Ke Pyar Mein 22nd November 2022 episode starts with Sai telling Ashwini as Savi’s grandmother she has nothing to do with her.

Meanwhile, Ashwini tells her that as a mother herself she understands that the mother-daughter bond is not that easily broken, it may take time for part distance but the love will always be there.

After a while, Karishma notices that Patralekha has not eaten food and informs Virat and Ashwini about it.

Later, Virat comes to Patralekha with a food tray and apologises to make her feel as if he is ignoring her and Vinayak.

He emphasises the importance of Vinayak in his life and that no one is more important to him than Vinayak.

He thanks her for helping him with Vinayak and he was not making her feel ignored or alienated while he was occupied with Savi.

Turning the conversation towards Savi, he tells Patralekha that he will be sending Savi to Vinayak’s school.

Patralekha asks him whether Savi agreed to it or not.

Virat tells her that Sai has no say in the decision while Patralekha asks him to think about Vinayak.

Seeing Virat look clueless, Patralekha points out the gravity of the situation due to which Vinayak will be bullied at school or maybe mocked for having Sai and Patralekha both present themselves as Virat’s wife and ex-wife.

Virat tells Patralekha that Vinayak is strong enough to handle the bullies and he should learn to face these challenges in life.

He also accuses Patralekha of having problems instead of Vinayak and tells her that he was wrong to think she supports him.

Elsewhere, Sai is ironing clothes and thinking about Virat's comments on her financial conditions.

Usha tells Sai to let go of the anger over Virat while Sai tells her Virat has questioned her upbringing and criticises her financial status for not being a good provider for Savi.

Sai tells her that this kind of discriminating thinking takes away children's innocence and discriminates their roles on a gender basis and they become discriminatory with time.

Sai tells Usha that she is raising Savi to treat all human beings as equals and that anyone and everyone can do everything.

Thinking about tomorrow's interview, Sai tells Usha that tomorrow Virat will find out what kind of homeschooling Savi has gotten and how fit she is as a mother.

After a while, Patralekha hears Vinayak and Savi happily preparing for tomorrow's interview and teasing each other about sharing a grandfather.

Later, Ashwini expresses her hurt about Sai's rejection to Ninad who is lost in his thoughts about Savi’s interview.

He does not feel that Savi is prepared to face the interview and tells Ashwini that he will use resources to get Savi’s admission if she fails.

Meanwhile, Virat comes to Bhavani to cajole her and tells her that Savi’s happiness is equally important to him as his happiness to her.

He also shares his plan to send Savi to Vinayak’s school.

Hearing this, Bhavani becomes angry and tells Virat that he has lost his senses and does not understand the complications his decision will create in future.

Virat looks disappointed and tells Bhavani that he will wait for the day when she will accept Savi as her granddaughter.