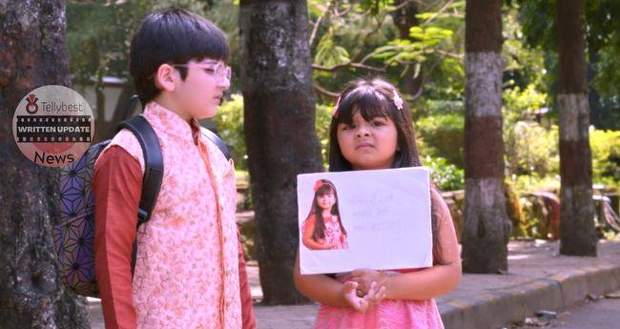 Midway the kidnappers have to stop the car due to the crowd when the children escape the car while Sai attacks them from the front.

Virat comes just when the kidnappers are about to overpower Sai.

Meanwhile, Bhavani and others arrive at the fair and try to call Virat and Patralekha.

Failing to reach them, they decide to spread and search for the children.

Meanwhile, Savi and Vinayak come back to the fair in hopes of meeting Sai and Virat and hide under the Ravan dummy.

Just then, the Ravan is put on fire to perform Ravan Dahan.

Vinayak and Savi are trapped in the fire when Bhavani observes them on the screen and cry to save them.

Just then Virat, Sai and Patralekha return to the fair with kidnappers and watches Vinayak and Savi trapped in a fire and run towards them at full speed.

However, Patralekha falls down due to her injury.

Virat and Sai jump into the blazing fire and carry the children in their arms and battle the fire to safely bring the children out and hug each other together.

Just then Patralekha comes to Vinayak and complains to him for not thinking about his parents while putting their life at risk.

However, Bhavani tells her to scold Savi who has instigated Vinayak into doing something rash.

In the meantime, Virat chides Bhavani for talking this way about children when they could have died.

Afterwards, Savi apologises to Sai for coming out alone to the fair as she cannot see Vinayak sad and pining for his birth parents to ask them why did they leave him.

Later, Virat hugs Vinayak but he did not return the hug which Virat and others notice with surprise.

After a while, Sai understands Vinayak's hesitation and calls him to her questioning him about his fear of Virat and Patralekha leaving him.

Comparing her love for Savi, Sai tells Vinayak that his parents were equally worried for him and how Patralekha puts her life at risk to save him and so did Virat when he sees them in the fire because he is their life just like Savi is hers.

She sights the example of Lord Krishna who was separated from his birth mother and was raised by his mother Yashodha and both mothers loved him equally.

Sai also praises Vinayak’s strength and courage for coming here together and facing the kidnapers and it is all due to his parent's love and that is why they will never leave him.

© Copyright tellybest.com, 2022, 2023. All Rights Reserved. Unauthorized use and/or duplication of any material from tellybest.com without written permission is strictly prohibited.
Cached Saved on: Monday 21st of November 2022 06:04:59 AMCached Disp on: Tuesday 29th of November 2022 10:28:18 AM