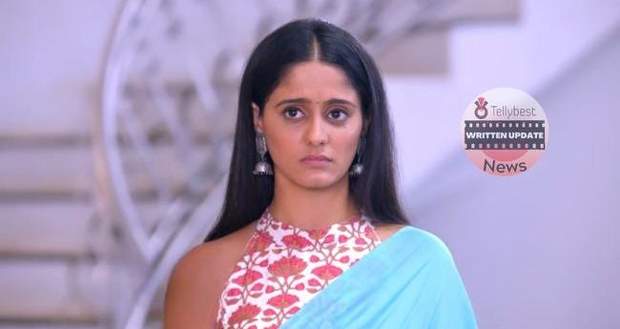 Just then she feels Kamal sitting beside her.

Sai tells him that when she thinks of Savi longing for her father she feels bad.

Kamal tells her not to hide her feeling to see Virat with Pakhi.

Sai tries to deny her feeling but Kamal tells her that she wouldn’t have behaved this way.

Sai tells him how she wishes for Virat to never come into her life for she was just a burden to Virat.

Kamal tells her that there is a purpose behind Virat coming back to her life which she should learn to accept it.

After a while, Savi comes to Sai asking her to get ready to go and meet Vinayak while Sai tells her that they are not going anywhere.

Meanwhile, Virat is getting ready to leave for Nagpur while Patralekha asks him to consider staying back a while as he is not well.

However, Virat tells her that he will not stay here for another minute.

Later, Ninad calls Patralekha to ask about Virat while Virat tells them that they are coming back to them soon.

Ashwini tells him to stay a little longer and get better whereas Virat remains adamant to leave.

Vinayak wants to stop by Savi's place to wish her bye before leaving while Ashwini tells him to bring Savi and Savi's mother with him to Nagpur.

Later, Shivani tells Virat that he is in a hurry because it is Patralekha’s birthday.

All the family members wish Patralekha a happy birthday and tell her they will celebrate her birthday with pomp once she returns.

Virat feels embarrassed about forgetting Patralekha's birthday and wishes her along with Vinayak.

Patralekha tells them that her birthday will come every year but for now, she needs to focus on Virat’s health.

Usha who has come to tell Virat everything turns back with tears in her eyes while Sai questions her about still wanting to tell Virat about Savi.

Sai tells her that Virat has settled wonderfully with Patralekha and that his family loves her too. Therefore there is no need to disrupt their life with Savi’s truth.

After a while, Virat tells Patralekha to get going while Patralekha tells him that she will make a last sweep before leaving.

© Copyright tellybest.com, 2020, 2021. All Rights Reserved. Unauthorized use and/or duplication of any material from tellybest.com without written permission is strictly prohibited.
Cached Saved on: Friday 30th of September 2022 05:12:17 PMCached Disp on: Saturday 1st of October 2022 05:00:40 PM