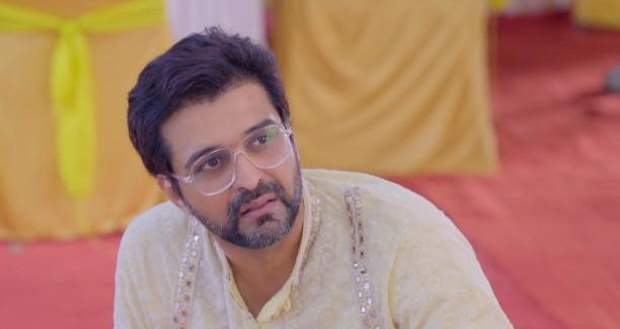 Sai feels overfed and sleepy and asks Virat to wake her up after 10 minutes.

Virat minces his teeth at Sai’s casual attitude but agrees to her demand.

Right after ten minutes, Virat asks Sai to wake up and throws water on her when she continues to sleep.

Sai wakes up with a start and wails at Virat for waking her rudely.

Virat ignores her and asks her to study but Sai further put a condition on Virat to drop her to the university tomorrow.

Virat refuses to listen to her but Sai again blackmails him that she will not give the exam.

Sai later handcuffs herself with Virat and throws the key outside the window.

Instead of getting angry, Virat laughs sarcastically and takes out his gun to shoot the handcuff but Sai requests him to find the key instead.

Virat and Sai stealthily try to go to the lawn but Sai becomes naughty and annoys Virat going forwards and backwards.

Patralekha spots them and misunderstands their togetherness for affection.

As they reach the lawn they find Bhavani who is pleased to see Virat but becomes bitter on seeing Sai.

Soon Virat spots the key and frees themselves.

In her bedroom, seeing Virat asleep, Sai climbs on him and vents her anger on him and tells him to forgive her at all cost and keeps on repeating it while Virat pushes her away.

Sai comes out of the reverie and realises that it was just a dream.

The next morning, Sai tells Virat that she is already late for the exam so there is no point in going to college which brings Virat into action and he rushes Sai to get to the college.

On reaching the college, Virat finds out that Sai has fooled him into bringing him to college and glares at Sai while Pulkit enjoys Sai’s prank.

Sai hugs Virat before going to her examination room while Virat waits outside and thinks to take the hard decision.

Later, Sai comes out and tells Virat that her paper went very well and she has fulfilled her father’s last wish.

Virat tells him that now it is his turn.

Sai gets excited thinking Virat has planned a surprise for her.