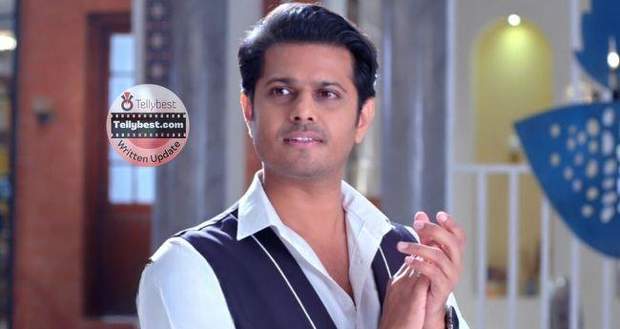 Patralekha recognizes the sweater very well and asks Virat where he found the sweater and if Sai has given it to him.

She tells him that if Sai wants to return something, she should return their Veenu whom she had given birth to, and who should be living with them in this house.

Patralekha asks Virat if Sai is using this sweater as a ploy to get close to him again.

Virat tells her that he has not got this sweater from Sai.

Patralekha shouts at him saying his every important talk begins and ends with Sai.

Just then Vinayak comes to Virat, asking him to get some colors down.

Virat does not want to leave the conversation but Patralekha’s rude behaviour forces him to go.

Just then Patralekha sees a silhouette at the bedroom window and goes to check.

However, the person is gone, and then a stone wrapped in the paper comes into the room.

Patralekha is about to read it when Vinayak comes to call her to show the upgrades in the house.

In the meantime, Vinayak shows the house to Patralekha and is about to take a selfie when Sai calls Vinayak.

Sai tells her that she is just calling to talk to him.

Vinayak tells her that he is slightly busy and Sai tells him she will call later.

However, Sai cannot control herself and calls him again and again until Vinayak forgets about the selfie and begins to talk to her.

Patralekha gets frustrated and taunts Virat that Sai has impeccable timing and always comes in between their family moment to ruin it.

Virat ignores the gibe and tells Patralekha to come to the room to listen to what he has to say.

In the meantime, Sai is practicing telling Vinayak about being his real mother and that many years ago, he was lost to her in an accident and Patralekha is not her real mother but she is.

After a while, Sai contemplates the effect of this news on Vinayak and what will Vinayak call Patralekha after finding the truth.

Just then she suffers a hallucination where Ashok comes to her asking about Patralekha and her feelings when Vinayak will be taken away from her.

However, Sai tells him that she also has a right to live with her son whom she has gotten after such a long time.

She tells him that as a mother who has suffered, she deserves to have her child with her too.

Meanwhile, Patralekha comes to her room, looks for the letter that is nowhere to be seen, and tells Virat about it.

On being asked what was written in the letter, Patralekha tells him that she did not read it then and had left it here.

© Copyright tellybest.com, 2022, 2023. All Rights Reserved. Unauthorized use and/or duplication of any material from tellybest.com without written permission is strictly prohibited.
Cached Saved on: Wednesday 25th of January 2023 08:52:23 AMCached Disp on: Tuesday 31st of January 2023 06:39:06 PM