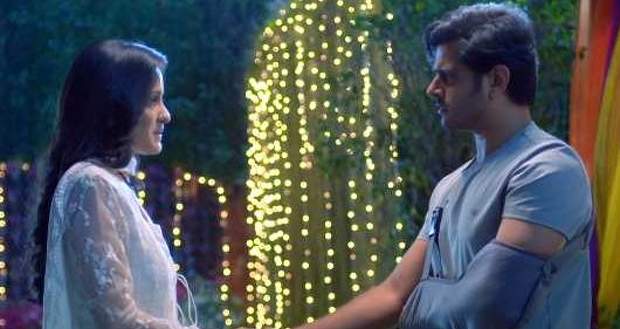 While getting ready, Sai tells sleeping Virat that she not only wants his forgiveness but his love also now.

After a while, applying colour on sleeping Virat's cheek, Sai feels naughty. She very slowly brings her cheek closer to Virat and rubs it with his to share his colour.

However, Virat stares at her which makes Sai hide.

Realising that colour on his cheek, Virat is about to scold Sai but Devi comes in and takes Sai’s blame on herself.

On being asked to join Holi celebrations by Devi, Virat politely refuses her.

Observing the colour on Sai’s hand, Virat suspects Sai for applying colour on him.

However, Sai distracts him with her inane talks and leaves the room before Virats suspicion could find evidence.

Meanwhile, Devi informs the Chavan that Virat has refused to come down and wishes to rest in his room.

On hearing Devi's words, Patralekha gets jealous of Sai and Virat sharing the space and goes to check on Virat.

Patralekha spots Sai coming out of her room with her purse and taunts her.

Sai goes on berating Patralekha for cheating on her husband and having feelings for Virat which doesn't give her the right to point fingers at others.

Later, Patralekha complains to the Chavan about Sai not letting Virat rest in peace.

In his room, Virat talks with Kamal telling him about his pain of being hurt by Sai.

Sai stay strong against Chavan's family's taunts and accusations and asks Ninad and Ashwini to pray for her and Virat.

However, Bhavani and others keep on hurting Sai with their hateful comments.