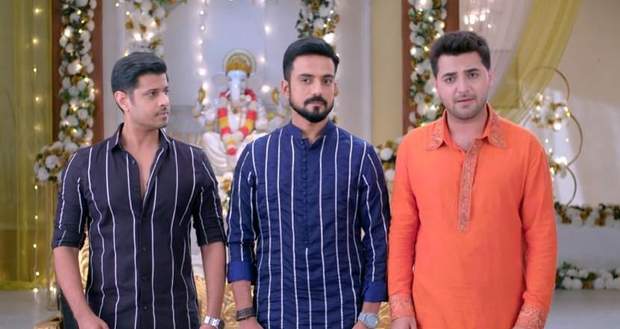 Today's Ghum Hai Kisi Ke Pyar Mein 23rd May 2022 episode starts with Samrat explaining to Patralekha that he has seen and read her blog and compliments her on her writing skills.

Patralekha is unsure about rewriting after such a long break but Samrat tries his best to reignite Patralekha's passion for writing.

Samrat offers to take Patralekha on trips so that she can remember what motivates her and become successful.

On the other hand, Sai is complimenting Virat for taking a stand for her and calls her Virat instead of Virat sir.

Virat feels joyous at Sai calling him by his name and tells her to keep repeating it as it feels like dream to him.

Sai hugs him to make him believe that this is not a dream. However, they get lost in their world where there is no one but them and milky whiteness surrounds them everywhere.

In that world, Virat romances Sai and feels her presence around him. Later he presents her with beautiful bangles and put them on her wrist and admires it lovingly.

Sai is mesmerised by Virat’s touch and gets closer to him to feel his strength beside her. The feelings of coyness and boldness attack her together she is reacting to it unpredictably.

Virat and Sai get intimate with each other and become one.

On the other hand, a loud procession is dancing to loud music outside Jail to welcome Jagtap returning from jail after a long time.

Jagtap hugs Bhao and tells him that he has taken great efforts to bring him out of jail and asks him to tell him whatever his heart desire.

After reminiscing about Sai from the old days Jagtap tells him that he wants Sai.

The next morning, Sai looks happy while Virat teases her about last night, Sai tries to be bold but shyness forces her into silence.

After a while, Ashwini calls them for breakfast when Bhavani is absent and others taunt Sai and Virat for being responsible for Bhavani’s anger.

Samrat tells Patralekha to take Bhavani’s breakfast to her room but just then Bhavani arrives at the table and praises Patralekha for caring for her despite her rude behaviour in the past few days.

Later, Bhavani asks Sai to get a box from her room.