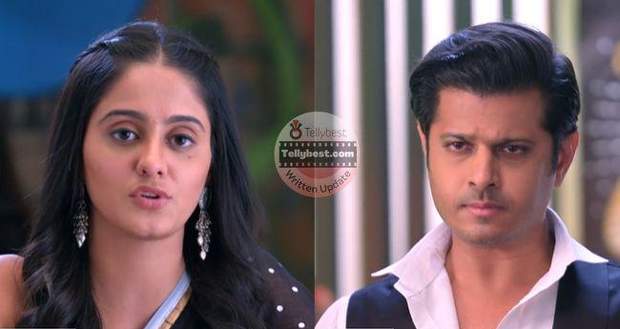 In the meantime, the principal asks Savi various questions to which she is able to answer everything.

Later, the Principal offers to admit Savi to Vinayak’s class seeing her prowess.

However, Sai tells her that Savi will not be going to this school as she cannot afford its fees.

She also tells her that she has gotten Savi admitted to different schools and this interview only proves that her homeschooling is worth the time she has spent.

Virat does not like Sai’s decision and tells her to not undermine his decision.

After a while, Virat apologises to the principal for Sai’s refusal to admit Savi to the school.

Meanwhile, Bhavani talks on the phone to someone when Ninad and Ashwini come from shopping.

Ninad tells Bhavani that they have brought things for Savi for her school.

Bhavani taunts Sai for not teaching anything to Savi except bad manners.

Ashwini does not like Bhavani’s comment and tells her not to say ill-will about Savi’s mother as she will not tolerate it.

However, Bhavani gets angry to hear Ashwini side with Sai and blames Sai for causing differences between family members.

Ninad tells Bhavani to respect Savi and Sai as they will often come to the house.

Elsewhere, Vinayak sees Savi in the school and introduces her as his sister to his teacher.

Meanwhile, Virat comes to Sai to ask her not discussing with him before admitting Savi to just any school.

However, Sai tells him that she only wants to prove to him that her homeschooling was her choice not any helplessness.

She tells Virat that she wants Savi to learn to share, adjust and help people and not what brand of watch or computer she will use.

She emphasises to Virat her hard work in raising Savi and she will go to the school where she has decided.

Virat tells Sai that he will support Savi’s expenses from now on as she is her daughter too.

Sai agrees to it but tells him that from now on they will take decisions related to Savi after talking to each other.

Virat asks Sai, where she has been admitted and gets surprised to know that Savi will be going to the school he went to.

At home, Virat tells Ninad and others that Savi will not be joining Vinayak’s school.

Bhavani smirks saying she has already predicted that Savi is not bright enough to get admission to such a prestigious school.

However, Virat tells them that Savi has cleared the interview at the school.

© Copyright tellybest.com, 2022, 2023. All Rights Reserved. Unauthorized use and/or duplication of any material from tellybest.com without written permission is strictly prohibited.
Cached Saved on: Wednesday 23rd of November 2022 11:20:21 PMCached Disp on: Wednesday 7th of December 2022 12:37:52 PM