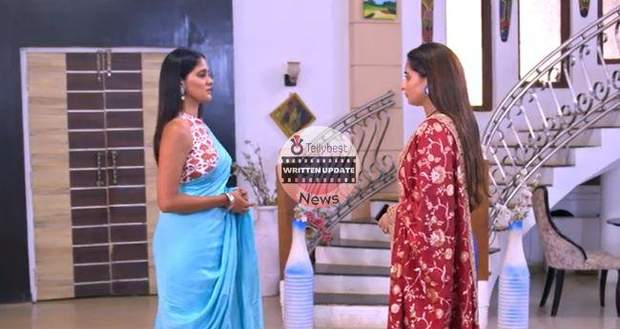 As Patralekha gives the last sweep, she sees Sai and comes to thank her.

Sai advises Patralekha not to take Virat today as Virat’s condition is not that stable.

Meanwhile, Virat settles Vinayak in the car and comes inside to call Patralekha.

Seeing Virat, Sai tells Virat to not leave today as his wounds are fresh and travelling can adversely affect his wounds.

However, Virat tells Sai to not worry about him as he has had enough of her treatment and will get treated at Nagpur.

He also tells her that he is going with his family to his home.

Savi arrives just as Virat leaves and cries for not being able to meet Vinayak and thinks of calling him.

Sai sternly tells Savi not to call Vinayak and forget about them as they will never come back.

As Savi goes away crying, Sai vows to never let Virat come back into their life and neither Savi will find out about her father.

Meanwhile, Vinayak wants to call Savi to say bye but Virat stops him and tells him not to talk to Savi anymore as they will not return.

On the road, Virat comes across the tree that has Savi’s message and prays for that child to meet her father.

In the meantime, Savi is crying at Virat's leaving them again without meeting her.

Later, Virat arrives home where his family welcomes him while Harinee complains to him about being taken out of the hostel.

Ashwini asks Virat for looking pale and worried but Virat tells her that he is only tired.

Patralekha tries to calm him and offers to tell everyone about Sai.

After a while, Patralekha tells Virat that she knows him very well and understands all his problems including what is bothering him now.

Virat stops Patralekha from taking Sai’s name and tells her that he and his family suffered a lot because of her.

Patralekha asks him to tell these people who will feel bad if they find out from anywhere else.

Virat is unconcerned saying no one will tell them nor will she come back here so it's better to leave them in ignorance.

Unable to see Virat’s dejected condition, Patralekha suggests venting his anger in front of everyone so that he feels light.