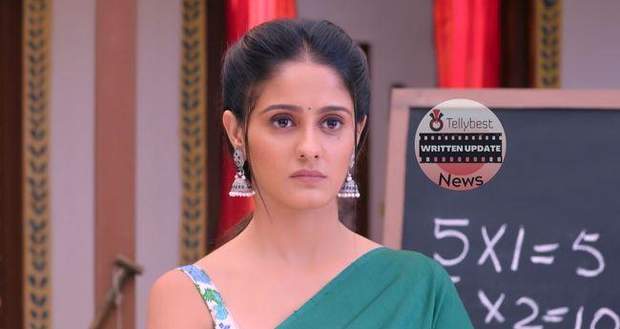 Today's Ghum Hai Kisi Ke Pyar Mein 24th August 2022 episode starts with Virat reading the message on the tree and answering the message that the father will come soon and prays to God to make the child meet his father soon.

Vinayak feels sleepy and puts a drawing book near Savi.

Just then Sai comes to check up on Vinayak and hands over his bag telling him to apply the balm on his legs regularly.

Afterwards, Sai is happy to hear that he likes to eat Modak and tells him that that is what they will have for breakfast.

After a while, Sai and Savi drop Vinayak at the camp.

Sai also tells Vinayak to take a stand for himself in future and not get bullied by anyone.

Just then Virat enters the camp but neither Sai nor Virat sees each other and Sai leaves with Savi.

On being asked, Vinayak tells Virat that he is absolutely fine because of the efforts of doctor aunty who looked after him yesterday.

The principal also praises Sai and tells Virat she has left for the day and will come back tomorrow.

In the meantime, a man comes to Gulab Rao complaining about Sai influencing his wife and instigates him for taking some action.

Elsewhere, Sai reads Virat’s message on the tree and become excited and runs toward home.

On the other hand, Virat is teaching drills to the kids at the camp while Vinayak watches them.

Vinayak looks at bully boy Akshat and tells Virat about it saying that the doctor aunty has asked him to not keep anything from his father.

Meanwhile, Savi comes home running and gets ready to meet her daddy and takes Sai and Usha to the trees to show them the message.

However, heavy rains have washed the messages disappointing Savi.

In the meantime, Usha asks Sai to tell Savi about her father as she desperately waits for him and has so much to tell him.

However, Sai becomes angry and tells Usha to stop asking her to do the impossible as she will not go back to living a life where she was betrayed time and again and soon Savi will also understand that her mother is sufficient for her.

© Copyright tellybest.com, 2020, 2021. All Rights Reserved. Unauthorized use and/or duplication of any material from tellybest.com without written permission is strictly prohibited.
Cached Saved on: Saturday 1st of October 2022 10:32:55 PMCached Disp on: Wednesday 5th of October 2022 04:54:16 PM