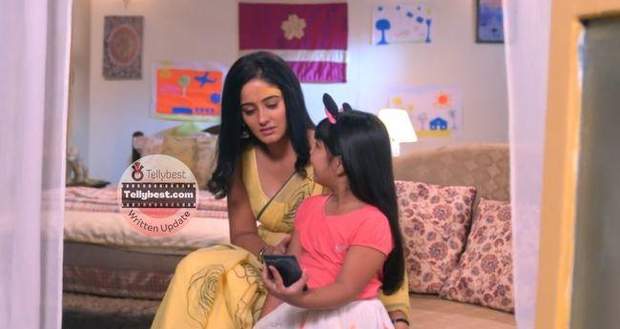 Today's Ghum Hai Kisi Ke Pyar Mein 24th December 2022 episode starts with Patralekha asking Ashwini if it looks like a dream to her while Ashwini pinches her and asks her if she now feels it is real or not.

The next morning, all the family members are sending away Patralekha and Virat.

Ashwini holds Virat’s ear and tells him to not give any grief now or else he will have to answer her.

Meanwhile, Sonali asks Mohit when he is planning to give a grandson to her and why are he and Karishma apart.

On the way, the track Ghum hai is playing on the car radio which reminds Virat of Sai and he changes the station.

Patralekha asks his reason for changing the track while Virat tells her that he does not want to think of the past.

Later, Virat talks about Vinayak who must be feeling sad at being left out.

Patralekha sarcastically suggests turning around and picking him up as well but Virat refuses to say this trip is for them only.

At the school, Sai sees Mohit coming out of the car and decides to tell Mohit about Karishma.

She asks Mohit about him and Karishma and if everything is alright between them.

Mohit hesitates a little but tells Sai that everything is fine.

On being asked, Vinayak tells Sai about Virat and Paralekha going on a honeymoon trip alone.

Sai's heart constricts a little but she composes herself and tries to appease Vinayak.

She also suggests taking him on a trip of their own so they can have fun too.

Later, Sai calls Ashwini to take her permission for taking Vinayak with him while Bhavani overhears her and tells her to stay away from Virat and Patralekha for this trip.

Meanwhile, Patralekha and Virat arrive at the hotel room honeymoon suite which is decorated with hearts and rose petals.

Later, Virat and Patralekha come down for a meal where Patralekha puts her head on his shoulder thanking him for bringing her there.

Just then Patralekha observes a couple having a cute moment and captures it with her camera.

Virat does not feel it right to take the picture without permission.

Seeing Virat upset, Patralekha goes to tell them about the picture which they appreciate and tells her to mail them as well.

Later, Virat gives Patralekha her medicine which the couple admires.

Patralekha suggests video calling him and moving away due to a network problem.

Afterwards, the couple asks Virat about Patralekha’s ailment while Virat tells them about being in a bus accident.

Hearing that the other woman becomes anxious while her husband calms her and tells Virat that they have been in a similar accident a few years back while going to Garchiroli from Nagpur.