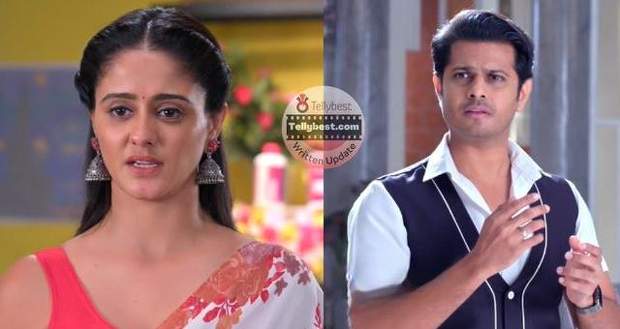 She asks her to get ready for the seminar that is organized to encourage women to vote.

Just then someone comes to Patralekha and gossips about her, telling the other woman about Patralekha being the mother of an adopted son who can never take place of her own child.

However, the woman blatantly talks about the importance of having one’s own child.

Meanwhile, Sai is preparing her home to welcome Vinayak while Savi asks her about taking so much effort when Vinayak lives in Chavan's house and has a room of his own.

Sai thinks about bringing Vinayak back home soon and tells Savi that Vinayak should have a place of his own when he comes to their house.

In the meantime, Patralekha stands to answer the women and compares herself to Mother Yashodha who has brought up Lord Krishna as her own son and is called Yashodha Nandan and not Devki Nandan.

She chides those women for having a soiled and degraded mentality that does not allow them to see what is beyond societal rules.

She also tells them that it is not important for a mother to bear a child of love but the true relationship is that of Love that is not bound by societal rules, putting people in boxes.

Meanwhile, Usha asks Sai if she thinks that Virat will be able to tell Patralekha the truth.

However, Sai tells her that it will make no difference to her as she will do as she sees fit.

She has decided to bring back her son where he belongs and no one can separate a son from her mother.

Sai also Usha that Virat has no choice but to tell Patralekha the truth about her son and will have to bring Vinayak back to her in just 32 hours.

Meanwhile, Mohit takes Karishma for a long drive and promises to rectify his past mistakes so that he can happily live with her.

Meanwhile, Patralekha tells Vinayak to not use his Mobile at the dining table.

Virat is still worried about telling Patralekha and is messaging Patralekha about needing to talk to her about Vinayak when Vinayak snatches his phone from him, telling him no mobile phones on the dining table.

Vinayak gets happy and tells her that she is truly his Yashodha mother and he is her Kanha.

Patralekha hugs Veenu and tells him that he is the one who gives her a purpose to live and has taught him the real value of life.

The next day, Vinayak and Savi participate in a Clay modeling competition where both their families join them to encourage and motivate them.

Later, Sai takes out the placard to cheer Veenu and Savi while Ninad asks her if they can also join in.

After a while, Patralekha tells her family that the placard is old-fashioned but she has customized caps to cheer Veenu.

Patralekha distributes the cap to everyone while Sai also comes to her asking for a cap as she is team Vinayak.

Patralekha does not like Sai’s enthusiasm towards Vinayak while Sonali taunts Sai for always eyeing things that belongs to other just as she is doing now with Vinayak.

Later, Patralekha goes to the washroom, while Vinayak lands in trouble when all his colors get mixed.