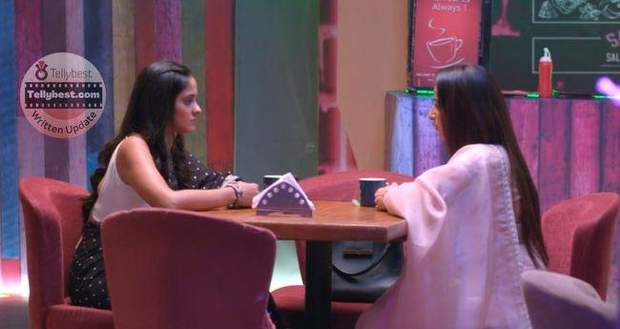 Today's Ghum Hai Kisi Ke Pyar Mein 24th November 2022 episode starts with Virat telling Sonali that Savi has passed the test and that principal has agreed to give admission to Savi.

Meanwhile, Ninad asks him what the problem is all about.

Virat tells them that Sai does not like the school as she believes that schools like that make people rich but do not make them better human beings.

Therefore, Sai has admitted Savi to a different school so that Savi can grow up to be a better human being.

Ashwini expresses sadness thinking about Savi who was excited to go to Vinayak’s school.

Meanwhile, Sai tells Savi that she has passed the interview with flying colours.

Savi asks Sai whether she will be going to school or not.

Sai distracts Savi to get her a prize while she tells Usha that she has refused admission to that school.

Sai points out that the school is expensive and will be a bad influence on Savi. She tells her that Savi will either grow up to be insecure or jealous because of the expensive things the children bring there.

Later, Sai explains to Savi that studying in a big school does not guarantee good education and that is why she has gotten her admitted to another school.

However, Savi is upset to hear that she will not be going to Vinayak’s school.

Nevertheless, Sai convinces Savi to go to another school.

In the meantime, Vinayak is disappointed to hear that Savi will not be going to the same school as him.

He expresses his distress about not liking the school where he has no friends and children make fun of him.

Vinayak tells him that he was looking forward to having Savi at his school and wishes that they can be together.

Later, Virat tells Vinayak that he has found the solution and will tell him about it later.

In the meantime, Mohit catches Karishma getting off some stranger's bike and feels angry.

Meanwhile, Ashwini questions Bhavani for celebrating the fact that Savi will not be going to Vinayak school.

On being asked by Patralekha, Virat tells everyone that he has gone to Savi’s school which was his school as well.

Later, Virat tells Vinayak that he has gotten an admission form from Savi’s school for Vinayak and from now on both Savi and Vinayak will study at the same school.

Patralekha tells Vinayak to get back to his room while she talks to Virat.

Virat questions Patralekha for being rude to Vinayak while Patralekha tells him that she is not ready to compromise her son's level of education by sending him to a mediocre school.

Virat tells her that Savi’s school has all the amenities and good teachers whose teaching is exceptional.

© Copyright tellybest.com, 2022, 2023. All Rights Reserved. Unauthorized use and/or duplication of any material from tellybest.com without written permission is strictly prohibited.
Cached Saved on: Thursday 24th of November 2022 11:40:47 PMCached Disp on: Thursday 1st of December 2022 01:44:03 AM