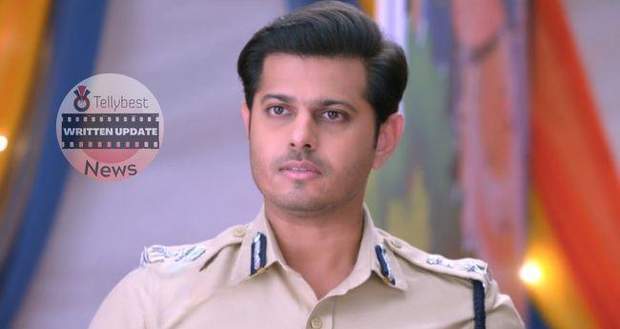 Today's Ghum Hai Kisi Ke Pyar Mein 24th October 2022 episode starts with Mother Sita (Sai) telling Luv Kush that their father is just an honest warrior and there is none like him.

Sai gets lost while talking about Ram (Virat) and just then the scene changes to Luv and Kush stopping the Ashwamegh Yagya.

Just then Mohit appears on stage dressed as Lakshman making the Chavan excited to see him.

Luv Kush asks Lakshman to call King Ram for the battle and later fights with him when he challenges them.

During the fight, Kush (Savi) fighting is praised by all which frustrates Bhavani.

After a while, Lord Ram enters the stage and asks Luv and Kush about stopping them and who is their teacher.

Just then their teacher comes and asks Luv Kush why did they stop the AshwaMegha.

Telling his teacher about his lesson to never let a challenge pass by, Luv also explains Kush's desire to question Lord Ram.

Kush asks Ram why did he leave his wife because of people’s talk.

Ram tells him that a King always puts his subjects first as this is “Raj Dharm”.

Later, Lord Ram gets emotional to find out that he is the father of Luv Kush.

Lord Ram confirms with Luv Kush if they really are his children while Luv Kush goes to get his blessing and Lord Ram hugs them while the curtain drops.

Later, Savi is excitedly talking to Sai about the play and how Virat felt like her real father during the play.

Savi also tells Sai that Vinayak and she have become a brother and sister and from now on she will address him as Vinayak Dada. She also tells about the bravado of Vinayak when he punctured the kidnapper's car.

On the other hand, Vinayak is also talking about Savi while Bhavani tries to distract him.

However, Vinayak circles back to Savi's praises and tells Bhavani that it is because of Savi that he could find out about the love that his parents feel for him.

Vinayak also tells them that from now on Savi will be his sister.

On Shivani's suggestion, Vinayak goes to save Savi’s number as 'Baby Sis'.

Meanwhile, Ashwini tells Virat and Patralekha that Vinayak needs a younger brother or sister and if he will not get it at home then he will search for it with strangers.

Virat and Patralekha get awkward at Ashwini’s suggestion while Bhavani praises her and tells her that she has aptly understood Vinayak’s desire.

Meanwhile, Sai is woken up by crying Savi who accuses her of keeping the truth from her that Virat is her father and tells Sai that she will live with him from now on.

Sai wakes up from the nightmare while shouting for Savi to not leave her.

Later, Usha comes to comfort Sai who shares her nightmare with her and tells her that she cannot take away Vinayak, Virat and Patralekha’s happiness by telling them about Savi.

© Copyright tellybest.com, 2022, 2023. All Rights Reserved. Unauthorized use and/or duplication of any material from tellybest.com without written permission is strictly prohibited.
Cached Saved on: Monday 21st of November 2022 05:05:09 AMCached Disp on: Thursday 1st of December 2022 12:23:14 PM