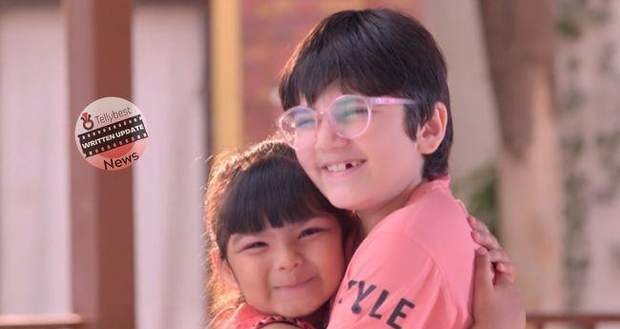 Today's Ghum Hai Kisi Ke Pyar Mein 24th September 2022 episode starts with Sai looking after Savi and realising that she has a fever.

Meanwhile, Vinayak is feeling nostalgic about Savi and calls Savi.

Sai is putting bandages on Savi and ignores the call.

Meanwhile, Ninad tries to cheer Vinayak but his stance does not change.

Later, Vinayak gets an idea and goes to Harinee to get Sai and Savi’s pic photo framed.

Meanwhile, Virat tells Patralekha that Sai will never come into his life and that Patralekha and only Patralekha will remain in his life.

Later, Sonali asks Vinayak to come and join them for dinner while he tells them that he is putting Savi and doctor aunty’s pic in the frame because he is missing them a lot.

After a while, Virat comes down for dinner and requests Harinee to sit with him for dinner as she can teach him something new.

Sitting for dinner, Harinee looks at the frame Vinayak has installed and calls her Sai Mami which attracts everyone’s attention.

Vinayak tells everyone that Sai is his doctor aunty and asks Harinee why is she calling her Mami.

Virat tells Vinayak that Harinee has misunderstood Sai as someone else and asks him to go to his room for a while.

Ashwini is shocked to hear Sai is alive while Bhavani asks about Vinayak.

Ashwini questions Virat for not telling them about Sai while Virat tells her that he does not want to talk about her.

Virat also tells them about Sai having a daughter whose father is unknown.

Elsewhere, Sai gets angry to see Jagthap at her doorstep while Jagthap comes inside and tells Sai that he is here to meet Savi and not her.

Meanwhile, Ashwini throws Sai's photo frame on the floor feeling hurt at Sai for not contacting her when she was alive.

On the other hand, Jagthap cheers Savi and takes her out while Savi bristles with anger.

At the Chavan house, Patralekha tells Ashwini that Sai has saved Virat’s life and is also treating Vinayak.

However, Bhavani is not impressed and tells her that Sai should have died instead of Vinayak who she had snatched from them.

Virat also asks everyone that he does not want to hear Sai’s name ever again in the house.

Later, Ashwini is crying her heart out bemoaning Sai’s stone-heartedness for not calling Virat or other family members after the accident, without any care for Virat who could have died if not for Vinayak.

Meanwhile, Bhavani declares that Sai will never come to this house and has no right in this house when she has left on her own accord.