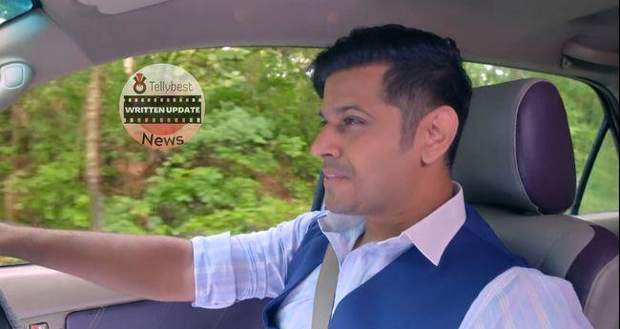 Today's Ghum Hai Kisi Ke Pyar Mein 25th August 2022 episode starts with Sai and Savi leaving on their bicycle while Virat passes by them but is unable to see them.

Just then, Jyoti comes after Sai and shows her the injuries caused by her drunkard husband, and cries to Sai that she doesn't want to stay with her husband anymore.

Sai calms her and takes her home to give her shelter.

The next day, Savi and Vinayak are chatting about their lives and talking about Vinayak's father being a police officer.

Meanwhile, the goons come there and try to kidnap Savi by pushing Vinayak onto the ground.

However, Savi and Vinayak both put up a fight to prevent the kidnapping when Virat comes there and saves Vinayak from falling face first.

Savi gets happy to see the police officer while Virat tells Vinayak to stand by the side.

Afterward, Virat fights with the goons to save Savi while the other goon takes Savi and runs say.

Virat runs after the goon and manages to save Savi while the other goons also arrive prepared to take Savi once again.

However, with his fighting skills, Virat manages to defeat all the goons with Savi on his back.

Virat calls the police station to come there and arrest the goons while he gets amused seeing Savi's bravery.

She introduces herself while Virat gets a flashback of his conversation with Sai after learning that her name is Savi.

At the same time, Savi thinks that Vinayak's father is cool and wishes to have a father like him.

Later, Savi makes Virat stop the car and rushes to a statue shop where she asks the shopkeeper for a happy family.

Vinayak and Virat get confused by this and Savi tells that everyone takes the statue of only Lord Ganesha for the festival but forgets Ganesha's parents.

And thus, Savi takes the statue of Lord Ganesha and his parents as any child cannot stay without their parents.

Savi asks for another statue and gifts it to Vinayak while Virat says that he'll pay for it.

Virat chats with Savi and smiles as he pays for the statue after which they leave to go home.

After dropping Vinayak at the camp, Virat and Savi chit-chat and talk about Savi's mother being multi-talented and her not knowing her father.

Further, Savi opens her tiffin box and Virat gets a flashback of Sai giving him fried Modak during his mission after seeing the same item in Savi's tiffin box.

Later, Virat and Savi enter their home and Savi rushes inside.

Sai sees Savi and starts scolding her while Virat gets a call and he leaves.

Savi informs Sai about the kidnapping and the police officer saving her and also dropping her off.

© Copyright tellybest.com, 2020, 2021. All Rights Reserved. Unauthorized use and/or duplication of any material from tellybest.com without written permission is strictly prohibited.
Cached Saved on: Sunday 2nd of October 2022 09:16:00 AMCached Disp on: Thursday 6th of October 2022 03:37:17 PM