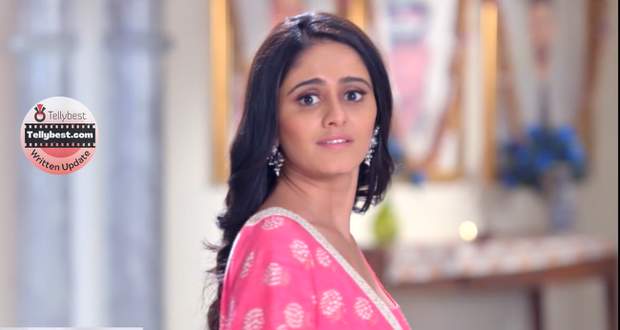 Bhavani does not like Sai’s interference in jumping to help Vinayak when his father is available.

Meanwhile, Patralekha walks towards the washroom when she feels she is being watched.

She leaves her bag at the counter and goes to freshen up.

Meanwhile, someone with gloved hands put an envelope in Patralekha’s bag.

Later, Patralekha finds the bag in Sai’s hands and snatches Vinayak’s palette from her too saying only she will help her son with whatever he needs.

Sai looks at Patralekha with angst but remains quiet.

After a while, the organiser tells the children that the time for the competition is over and asks the children one by one what they have made.

On seeing Savi's nameplate Bhavani looks with distaste and comments on her for trying to put Virat in her pocket.

Virat wishes to have a similar plate for his home.

Meanwhile, Virat looks at Patralekha and recalls her threat about Sai trying to take Vinu from her.

Later, Vinayak makes Patralekha emotional by dedicating an idol of Mother Yashodha and Lord Krishna that he has made.

He also tells the organizers that he is like a Kanha to his mother who is Yashodha.

The organisers invite Patralekha and Vinayak on the stage to present the gift when he wins the competition.

Sai feels disheartened to hear Vinayak praise Patralekha as his mother while Usha tells her that if Vinayak knew the truth then he would have presented the gift to her and not Patralekha.

Later, Patralekha wipes her tears from the tissue in her purse but misses the letter kept inside it.

Seeing Patralekha and Vinayak together, Sonali tells Bhavani to update this on her social media about Vinayak’s victory.

However, Bhavani feels no enthusiasm saying that Vinayak is not her flesh and blood for whom she would get excited.

She also comments on Sai’s behaviour towards Vinayak who is trying to take Vinayak from Patralekha to spite her.

Sai looks at Bhavani and tells her that she pities her for her ignorance about not knowing the truth but when the truth will come out she will regret her bitter words.

Bhavani gets worried thinking about what she does not know.

Later, Patralekha puts the sculpture in the home temple while Bhavani tells her to put the gift in her room.

Afterwards, the family decides on a celebration while Harini takes the responsibility for party arrangement.

Meanwhile, Virat looks at his watch and comes to Patralekha to talk to her but Patralekha refuses to listen to him as she is happy and does not want to spoil her mood.

She also tells him that she is taking Vinayak shopping to celebrate his victory.

Virat looks for Patralekha in the room and calls her when he cannot find her.

Hearing that Patralekha will take time in coming back Virat decides to tell her the truth on the phone.

However, Patralekha gets busy searching for the Pendrive and could not hear Virat as her phone falls on her lap.

Meanwhile, Virat tells her that Vinayak is Sai and his son and this is what he has been trying to tell her.

However, Patralekha tells him to repeat as she could not hear him but tells him to talk later as they are at the studio now.