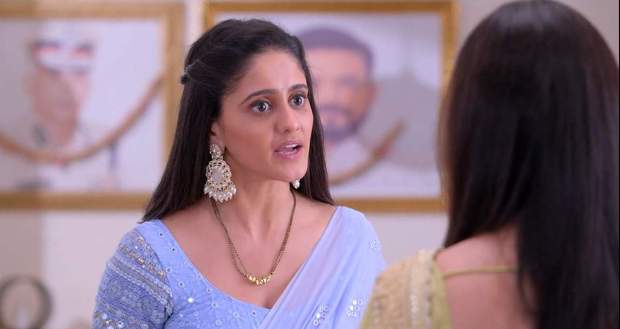 Today's Ghum Hai Kisi Ke Pyar Mein 25th July 2022 episode starts with Sai telling Patralekha that she cannot leave the house in rain and telling her that she has arranged for ice cream to curb her craving.

Patralekha looks agitated at Sai for spoiling her plan and asks for a different flavour of ice cream.

However, Sai has ordered all kinds of flavours for Patralekha so that she can opt for any kind of flavour and not create a scene.

Virat also comes to Patralekha’s room where Patralekha tells him that Sai has wasted his money.

Sai tells her to not worry as the rest of the family will have a party on her behalf.

After a while, Patralekha feels jealous seeing Sai getting all the attention of the family while sharing ice cream.

Later, Sai asks Ashwini to teach her knitting so that she can make something for her child.

Ashwini asks Sai why is she looking different while Sai tells her jokingly that she is pregnant.

Seeing Ashwini’s excited face Sai tells her that Patralekha is carrying her child which makes her pregnant too.

Ashwini admires Sai’s zeal and optimism in finding a silver lining on a cloudy day.

Afterwards, Sai goes to her room and faints.

Virat gets worried and calls Ashwini who blames her workload causing her to faint.

Later, Virat lectures Sai for not taking care of herself and tells her that from today onwards he will look after him.

Sai teases him lightly at his concern and they end the day on a happy note.

The next morning, Sai wakes Patralekha to do some exercise and Yoga while Patralekha makes faces while doing it.

Later, Sai serves her bland nutritious food instead of her favourite fries items that are on the breakfast table.

Afterwards, Sai comes to Patralekha’s room to give her medicines which she throws in the dustbin while Sai is away.

However, Sai observes this and once again gives medicine to Patralekha and forces her to eat them reminding her of her promise.

While leaving for the hospital, Sai complains to Bhavani about Patralekha for not taking care of herself and throwing the medicine in the dustbin.

Bhavani gets angry at Patralekha and calls her to question her.

Seeing Patralekha pissed, Sai tells Patralekha that in order for her to take care of herself she has planned a solution.

© Copyright tellybest.com, 2022, 2023. All Rights Reserved. Unauthorized use and/or duplication of any material from tellybest.com without written permission is strictly prohibited.
Cached Saved on: Wednesday 25th of January 2023 02:48:51 PMCached Disp on: Sunday 5th of February 2023 02:05:20 PM