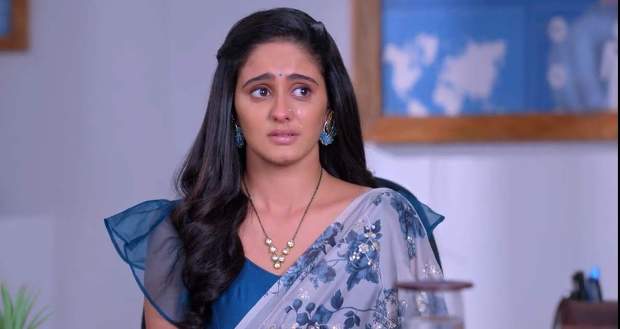 Today's Ghum Hai Kisi Ke Pyar Mein 25th June 2022 episode starts with Sai telling Pakhi that she wants her to give herself another chance and returns the saree to her.

Sai suggests that Pakhi doesn't have to live the rest of her life as a widow while Pakhi does drama and says that she loved Samrat and that he will always be in her life.

Meanwhile, Vaishali is shocked her Pakhi's drama and wonders how Pakhi turned out this way.

Sai questions Pakhi why she is supporting her in front of Virat and talking against their decision of surrogacy to the rest of the family.

However, Pakhi justifies her reasonings and says that she has the right to stay angry.

Sai says that she and Virat have finally decided to overcome their sorrow and that they will be the ones to choose whom they want as a surrogate mother for their child.

Vaishali tells Pakhi to not think about Virat anymore and leave the drama while Pakhi says that she has gotten a plan out of Sai's threats.

The next day, Sai goes back to work and comforts a lady and the child while operating on the lady's husband.

Meanwhile, at the Chavan house, Karishma reminds them that they have to hide the pregnancy as society will get suspicious if Sai's belly doesn't show and gets a baby after nine months.

Just then, Pakhi comes there and suggests herself be the surrogate mother for Sai and Virat's child.

Back at the hospital, the lady blesses Sai for helping her husband recover while Sai says that she is just doing her duty.

Meanwhile, Bhavani hugs Pakhi and says that she agrees with her suggestion while Karishma and Sonali question whether Pakhi has talked to Sai and Virat or not.

However, Pakhi says that she wanted to know Bhavani's opinion first and now Bhavani will do the rest of the work.

At the same time, Virat comes to Sai's hospital and surprises her with flowers while she suggests going out for a treat.

Later, Sai gets a call from Karishma informing her to return home immediately as Bhavani wants to talk about something.

Virat and Sai return home to see the whole family waiting for them in the hallway which makes them curious.

Bhavani reveals that she has found the perfect woman to become the surrogate mother and says that she's Pakhi.