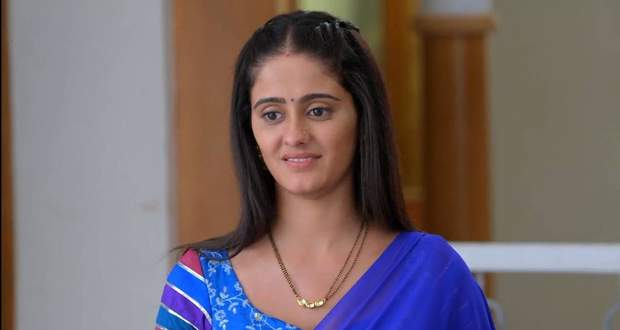 Today's Ghum Hai Kisi Ke Pyar Mein 25th May 2022 episode starts with Malhar's goons pointing a knife at Dr. Thurat and demanding a painkiller from him.

Dr. Thurat tells the nurse to give him painkillers while Sai stops Malhar and tells him to not sit on the bed.

Malhar argues with Sai while she also shouts at him and threatens him saying that she can report him to the police for threatening the doctor.

Malhar gets impressed by Sai's tactics and starts agreeing to her demands while the interns praise her.

Back at the Chawan house, Ashwini sees Virat returning and is about to heat the food for him when he says that he can do it and tells her to rest.

Virat returns with food and sits with Ashwini while telling her to go rest and she leaves.

After a while, Samrat and Pakhi return with a happy conversation as Virat sees them and gets surprised.

Samrat happily informs Virat that he and Pakhi are friends after which Pakhi gets uncomfortable and tells Samrat that she is feeling sleepy.

The couple goes to their room while Virat thinks of Sai and misses her.

Back at the hospital, Malhar flirts with Sai and she ignores but furiously slaps him when he tries to put her hair behind her ear.

Sai warns him that she has handled goons like him before and leaves.

Virat messages Sai and they both look at their phones with adoration while messaging each other I Love You's.

Just then, the warden knocks at the woman's washroom and tells Sai that Malhar has again created a scene.

Elsewhere, Pakhi deletes the pictures of her and Virat to move on from the past.

Just then, Samrat comes with green tea for her while Pakhi gets surprised that he remembers.

Malhar demands Sai give him another painkiller but she refuses saying that he can't be given anything until after four hours.

Later, Malhar drinks alcohol to bear the pain and hides it from Sai.

However, when Sai is distracted, Malhar takes her picture and later tells his goons to circulate in their connection that she is going to be his wife.