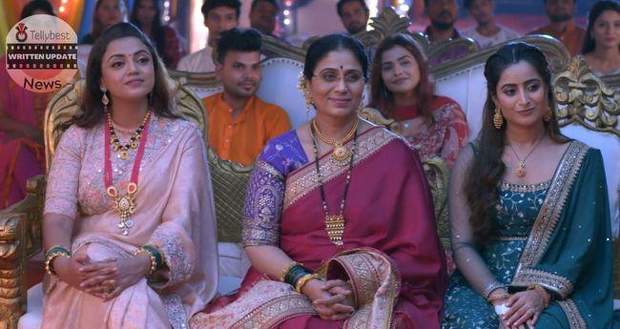 She then shares with Virat her fear that Vinayak might not go back to feeling insecure again.

However, Virat assures her that the way Sai has explained things to Vinayak it is highly unlikely.

After a while, Virat questions Patralekha about minding Ashwini’s talk of another child.

Meanwhile, Vinayak and Savi banter with each other about Vinayak calling Savi Baby Sis.

Just then Virat shows them the cutting of newspapers and invites her to the award ceremony that is kept to honour them for helping catch the child traffickers.

The children get excited to hear the news and make plans to attend it.

Later, Virat asks Sai about crying after the play and Sai tells him it was the emotional residue of the night's event.

After a while, Jagtap comes to meet Savi reading about her in the newspaper.

Just then Virat comes back to return something and gets envious to see Jagthap while Jagthap verbally fights with Virat for not taking care of Savi properly.

Seeing the fight escalate, Sai intervenes and scolds them for making a scene outside her house and influencing Savi.

On the other hand, Bhavani does not like Sai adding Savi’s name included in the award ceremony and thinks that only Virat and Vinayak deserve the accolades.

Ninad takes Sai and Savi’s side and tells them that they both also helped in catching the child traffickers.

Just then Patralekha also joins the conversation and tells Bhavani that Sai will not be affected by this award nor is she but she deserves one because she loves Vinayak and Savi equally.

Elsewhere, Jagthap is feeling bad for being insulted by Sai every time while his father shames him for going again and again after her.

In the meantime, Sai is expressing her concern about being jobless and not having enough money to buy a new dress for Savi.

Meanwhile, Jagthap’s father scolds him for ruining his life for Sai whereas Jagthap tells him to not say anything against Sai.

He instigates Jagthap’s ire by asking Savi being his child.

Later, Jagthap tells his father not to make him angry.

At the Chavan house, Patralekha is proud of Vinayak for getting the award and encourages Vinayak about getting many more medals in future when he will get better.

On the other hand, Savi gets dressed as a police officer and is excited to go to the ceremony.

Savi also takes her bag with her in which she has kept something secret.

Meanwhile, Virat and the Chavans arrive at the award venue. Bhavani gets surrounded by the media but she tells them that she is here as a proud grandmother of Vinayak who is getting a medal for his bravery.

Just then journalist sees Savi and runs to them while Savi comes to Virat and Vinayak and salutes Virat in a police officer style.

Vinayak praises Savi and tells her that she looks like Virat.

© Copyright tellybest.com, 2022, 2023. All Rights Reserved. Unauthorized use and/or duplication of any material from tellybest.com without written permission is strictly prohibited.
Cached Saved on: Monday 21st of November 2022 01:56:12 AMCached Disp on: Thursday 1st of December 2022 02:12:25 AM