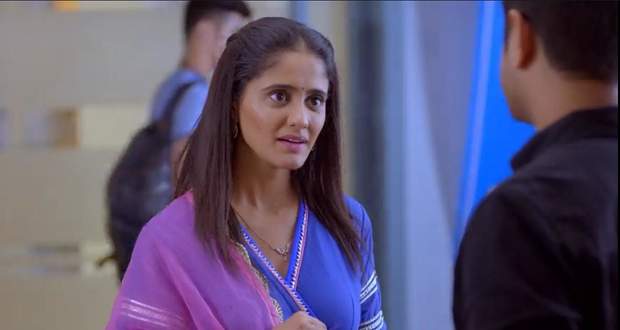 However, Sai tells Rajeev in a morbid voice that now she has understood the futility of capturing sand in her hands.

Soon, everyone is ready for the “Sangeet” ceremony and welcomes Rajeev and his family.

Rajeev's sister Anuradha asks about Sai who is nowhere to be found.

Virat also wonders about Sai, who has been behaving oddly since morning.

Anuradha meets with Bhavani and immediately manages to annoy her.

Later, Sonali asks Anuradha about her being married to which Anuradha happily tells her that she is still single.

Meanwhile, Samrat confronts Patralekha about having feelings for Virat whereas Patralekha angrily tells him to think whatever he wants.

Samrat tells Patralekha to stop following the illusion or else she will end up alone.

After a while, Anuradha thanks Virat for forgiving Rajeev and asks about Sai and expresses her excitement about meeting her.

In her room, Shivani praises Sai for looking more beautiful than a bride and goes to get her phone.

At the same time, Virat comes in and is transfixed to see Sai all decked up and giving finishing touches to her makeup.

Sai looks at him and asks him about needing something.

Virat comes out of the trans and asks Sai why is she dressed like a bride.

Sai stares at him angrily and tells him that now that he has broken all ties with her, it should not concern him how she looks.

On the other hand, Patralekha tries to instigate Bhavani against Sai but Bhavani assures her that Sai is not powerful enough to trouble her.

Later, Sai and Shivani come down together while Virat stares at Sai lovingly and Sunny and Mohit capture this moment.

All the family members are equally amazed to see Sai so decked up and looking beautiful.

Sunny teases Virat for staring at Sai while Rajeev introduces Anuradha to Shivani and Sai.

Later, Mohit offers to take their photo but Sai moves to Shivani’s side ignoring Virat.