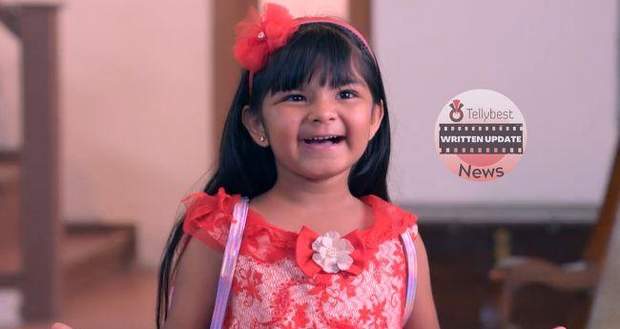 Gulab Rao denies the allegation saying why would he do that when he has already warned her.

Sai warns him that if he dares to do it again he will regret it for the rest of his life.

Gulab Rao observes Sai’s reaction to her husband's name and tells his goons that Sai's Husband is her weak point.

Meanwhile, Virat and Vinayak are ready to leave and waiting for Savi and Sai.

On the other hand, Sai is cycling faster to reach the camp but fate has taken Virat and Vinayak away before Sai could reach there.

Savi also misses Vinayak and cries about not being able to meet him.

Sai tries to console Savi and assures her that they will meet soon.

Meanwhile, Virat also assures him that if God willing he will meet Savi soon.

In the meantime, the Principal gives Vinayak’s letter to Savi which also has his number written on it making Savi happy.

At the Chavan house, the house is being decorated for Ganesh Chaturthi when Ninad instructs the workers to take care of Bhavani's poster.

Meanwhile, Omi is fretting about business while Mohit tells him not to worry and enjoy his retirement.

Just then, Ninad takes Omi away from Mohit so he can go to the office.

Just then Sonali comes to ask Mohit if he has eaten breakfast and asks Karishma who is about to leave.

Karishma rudely answers Sonali and leaves the house while Sonali taunts her for not caring for her.

After a while, a worker comes asking to place the flowers and Sonali guides her to the Malkin of the house.

After asking all the ladies of the house, the worker finds Patralekha whom Bhavani label as Malkin.

Patralekha looks embarrassed and tells Bhavani that she is the Mukhiya of the house and the district.

Ashwini also agrees with Bhavani and puts a Teeka on Patralekha to ward off the evil eye.

Shivani challenges Patralekha that her guess about Vinayak's arrival is wrong while Patralekha accepts the challenge and goes to open the door and proves Shivani wrong.

Everyone welcomes Vinayak while Patralekha asks him if she has missed him or not.

Vinayak tells her that he has missed everyone which weakens Patralekha’s smile.