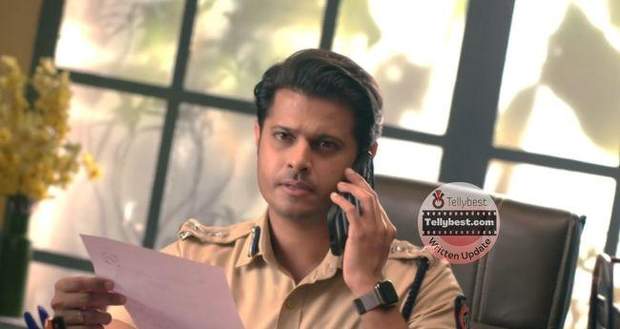 She tells the audience that a woman throws away her intelligence after becoming a wife.

Hiding her pain in her smile, she tells the audience that she wants to tell the current wife of Mr Oops that she is not interested in getting back her husband whom she has left of her own will.

Meanwhile, Virat is thinking about the couple’s talk and a ray of hope is rekindling in him about Baby Vinayak being alive.

At the same time, Patralekha comes to Virat dressed seductively but Virat’s tangled thoughts do not let him appreciate Patralekha.

However, Patralekha questions him for not admiring her and confesses her love for him.

On the other hand, at Sai’s resort, the host introduces an artist Sahiba who is a talented artist and can draw a painting of anyone in five minutes.

Soon, the artist introduces herself and tells the audience that she has decided on the face that she will be painting.

As the song Ghum Hai plays in the background, Sai gets lost in the memories of the past.

Elsewhere, Patralekha feels Virat’s absence and asks him what is bothering him.

Virat tells Patralekha about the bus accident that the other couple was in and that he suspects that it is the same bus as Sai and Vinayak’s.

Seeing Patralekha sleep, Virat thinks that it is better that she has not heard him as he wants to be sure about Vinayak.

Meanwhile, the artist, Sahiba, drew Sai’s painting and presents it to Sai.

Sai is astonished to see the keen eye of the artist who has captured her true feelings on canvas.

Sai asks her why she chose her among so many people.

Sahiba tells her that she recognises the artist in her who was making other people smile despite the pain she has inside her.

Sahiba offers Sai to share her pain with her while telling her that she knows that the Mirchi in her story is none other than Sai.

Meanwhile, Virat comes to the couple’s room at night to ask them about remembering the face of a woman who was carrying a child.

© Copyright tellybest.com, 2022, 2023. All Rights Reserved. Unauthorized use and/or duplication of any material from tellybest.com without written permission is strictly prohibited.
Cached Saved on: Wednesday 25th of January 2023 09:05:30 AMCached Disp on: Wednesday 1st of February 2023 06:36:29 PM