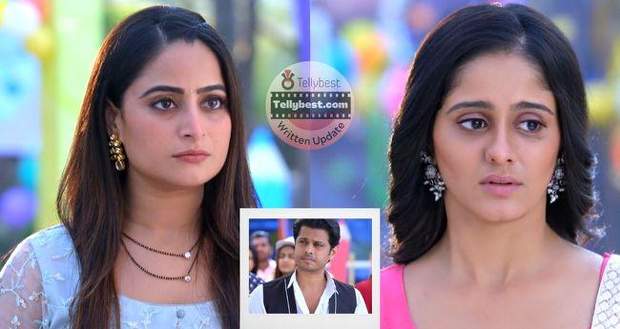 Today's Ghum Hai Kisi Ke Pyar Mein 26th January 2023 episode starts with Sai walking with the phone in hand when Usha tells her to not get agitated as Virat will call her the moment seventy-two hours will get completed.

In the meantime, Vinayak calls Sai and Sai becomes happy hoping Virat has told him about her.

However, her face droops hearing Doctor Aunty from Vinayak.

Vinayak tells Sai about the party and invites them to come there as they could not take the photographs at the school.

Sai gets angry hearing about the party when such crucial news is hanging in the balance.

Taking her bag, she decides to go and tell everyone herself because Virat will not be able to tell anyone anything.

Meanwhile, Virat knocks on Patralekha’s door asking her to come out as she has something important to tell her.

Just then Ashwini comes to take Virat with her so that he can help her with the party arrangements as too much work is yet to be done.

Virat does not want to go but Ashwini drags him with her without giving him any choice.

Later, Bhavani gets angry at Ashwini who is asking Harini about inviting Sai, Savi and Usha.

She tells her that Sai only comes to this house to cause grief and heartache and she does not want her to create trouble on a happy occasion.

Just then Karishma smiles happily to see Sai while Bhavani calls her an uninvited guest.

Sai tells them that she has not come here for some party.

Just then Sai's alarm goes off sounding ominous to Virat.

Sai tells her that there is good news that Virat will tell them himself.

Sai tells Virat to tell everyone why she is here.

Virat asks her to give him some more time as he has not told Patralekha about it yet.

However, Sai refuses to give more time to him while Bhavani asks her what is the truth that she has threatened her about in the morning too.

Virat tells her to give her five more minutes but Sai refuses with vehemence and tells him that she will not give him another second to keep the truth hidden.

She tells him that his family also deserves to know the truth but she can tell the truth herself.

Ninad asks Sai what this truth is and why has Virat not told them about it yet.

Sai tells them that Veenu is not the adopted child but the true heir to this family and her and Virat’s son.

Everyone gets shocked to hear this news.

Bhavani sits in shock feeling guilty for not completely accepting Vinayak as their own grandchild.

Shivani also calls it a miracle while Ninad tells Ashwini the good news and that their grandson has always been with them.

Meanwhile, Sai tells them that she will tell this truth to her son.

Virat requests Sai not to tell Vinayak and Patralekha just yet but Sai tells him that she already gave seventy-two hours to him and cannot give him another second.

Virat is shocked to see the room empty and Patralekha and Vinayak’s passport is missing too.

Seeing the closets empty of Patralekha’s clothes and her phone lying on the bed gives a very sick feeling to Virat.

In the meantime, Sai could not find Vinayak in his room and his closet was equally empty and comes out searching for him.

Virat also comes out from his room looking dejected and tells everyone that Patralekha is not in her room and that her and Vinayak’s passport is missing too.

© Copyright tellybest.com, 2022, 2023. All Rights Reserved. Unauthorized use and/or duplication of any material from tellybest.com without written permission is strictly prohibited.
Cached Saved on: Thursday 26th of January 2023 11:56:53 PMCached Disp on: Wednesday 1st of February 2023 08:22:40 PM