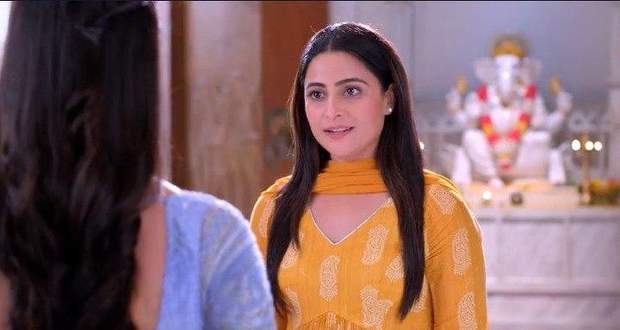 Today's Ghum Hai Kisi Ke Pyar Mein 26th July 2022 episode starts with Sai telling Patralekha that taking medicines on time and eating nutritious food is essential for the child's health but she has to force Patralekha every time to do that.

As a solution to these tantrums, Sai gives Patralekha to sign the papers saying that she will take good care of her child and will hand over the child safely to her.

Patralekha tells her that she is doing everything and still she comes to her with paper and pen.

Bhavani intervenes and tells Sai that Patralekha is doing everything as per her instructions and yet she finds faults with Patraleha.

Sai tells her that Patralekha does all that after so many tantrums.

Raj also favours Sai saying that Sai never do anything without reason while Patralekha tells Sai that she is treating the child like a commodity asking her to sign the papers.

Sai tells her that there is nothing wrong with signing the papers as she has done the same with Geetha.

Bhavani rebukes Sai for comparing Patralekha to Geetha who has ditched her at the last minute and only Patralekha was there to help her.

Patralekha acts innocent and tells Bhavani that Sai treats her like a stranger and not a family member.

She also tells her that Sai’s demand of signing the paper shows how much she hates her and she regrets being at the hospital that day now.

Bhavani shames Sai for making Patralekha agitated in her condition and tells her that her demand is absolutely ridiculous.

Sai asks Patralekha what is the need for so many arguments in writing just two lines.

Patralekha blames Bhavani for putting her through this insult by asking her to undergo this procedure.

After a long drama, Sai asks Patralekha to get a vote and decide whether she should sign the papers or not.

Sai supporters Rajeev, Ninad, Mohit, and Pulkit come and stand beside her while Bhavani accuses them of being biased.

Sai tells them to take the vote of someone who is not biased and calls everyone out.

On being favoured by Mohit, Patralekha asks Sai that they never asked her to sign papers to leave the house after completing her degree to which Sai asks Pakhi if she is jealous of her being Virat's wife.

© Copyright tellybest.com, 2022, 2023. All Rights Reserved. Unauthorized use and/or duplication of any material from tellybest.com without written permission is strictly prohibited.
Cached Saved on: Monday 21st of November 2022 06:58:48 AMCached Disp on: Thursday 1st of December 2022 09:20:18 PM