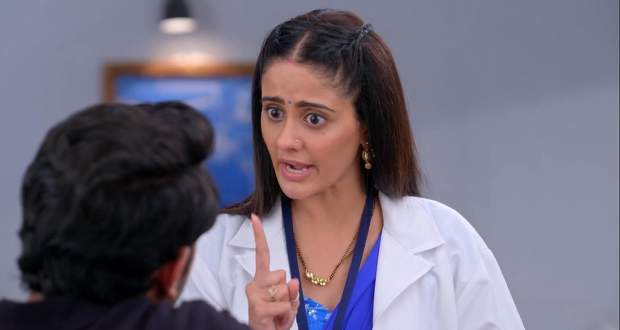 Today's Ghum Hai Kisi Ke Pyar Mein 26th May 2022 episode starts with Malhar shouting with pain on his goon and asking him to go and get Dr Thuraat.

Dr Thuraat comes in and approves Sai’s instructions about pain killer and tells them that he cannot get the pain killer before time.

Malhaar's goons threaten Thuraat and later offer him a bribe.

Dr Thuraat gives him an injection despite the nurse's warning against it.

At the Chavan house, Patralekha shares Samraat coffee with him making him happy.

At the hospital, Dr Thuraat observes the alcohol bottle under the table while picking up the bribe money from the floor and gets worried about Malhaar for administering the injection.

Dr Thuraat tells the goons to remove the alcohol bottles and not mention the injection to anyone.

After a while, Sai comes to check on Malhaar and finds him shivering and immediately shifts him to ICU.

However, Sai was too late as Malhaar was not responding.

Dr Thuraat comes in and blames Sai for not taking care of the patient and scares her with a guilty conscience.

Sai is adamant that she has done nothing wrong.

Malhaar goons come in and blame Thuraat while Thuraat threatens them in return, manipulates patients' medical charts and calls the police.

The next morning Virat comes to the hospital to investigate the case.

Dr Thuraat tells Virat that Sai has caused a mishap in the hospital causing a death of a patient.

Sai tries to defend herself but Thuraat stops her and accuses Virat of tempering with the investigation.

Virat quietens Thuraat and warns him for passing personal comments.

Sai is shocked to hear about the double dosage of painkillers and denies giving it to Malhaar.

Dr Thuraat insists that Sai was the doctor in charge and tells her that she has killed Malhar and the goons support him again.

However, in the light of the proof, Virat has to arrest Sai.

The nurse is shocked to see Sai being arrested.