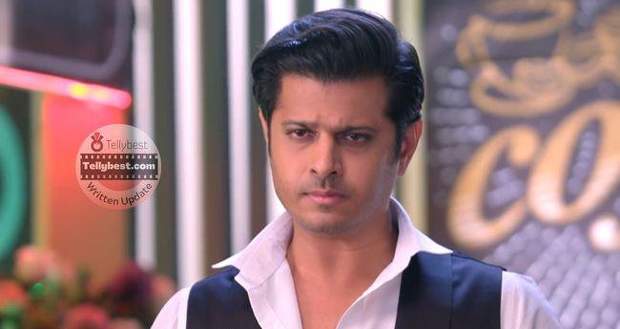 Today's Ghum Hai Kisi Ke Pyar Mein 26th November 2022 episode starts with Virat trying to convince Patralekha about his school when Patralekha questions him about not choosing his school for Vinayak before today.

She also tells him that if he is taking the decision to accommodate someone else then she will not stand aside and tolerate her son's life getting ruined.

Later, Virat drops Savi at her home when she asks him to stay with her while Sai tells her that Virat has to go as his family is waiting for him.

However, Savi begins to cry saying that is she not his family too and that could he not live with her the way her friend's fathers live with them.

Seeing Savi cry, Virat agrees to stay the night while Vinayak joins them too.

Savi becomes happy and tells Sai that now their family is complete too and they all group hugged each other.

Patralekha wakes up from a dream looking breathless when Vinayak comes to her asking to agree to change his school.

Patralekha who is still under the influence of the dream scolds Vinayak and sends him back.

Later, Ashwini advises Patralekha not to vent her frustration on Vinayak and calmly think about Virat’s decision and keep Sai aside.

The next morning, Sai readies Savi while Savi excitedly makes plans for Vinayak going school with her.

Sai looks troubled and tells Usha that children do not realise now how complicated their life is going to be.

She expresses her astonishment at Virat admitting Vinayak to Virat’s school and ignoring Patralekha’s feelings just like he used to treat her when she was his wife.

Just then, Patralekha calls Sai asking to meet her and tells her that she is sending her address.

Sai becomes worried thinking about the matter with Patralekha and what Virat’s decision about school will do to each one of them.

Meanwhile, Vinayak is upset at being scolded by Patralekha and refuses Virat’s offer of ice cream.

Virat explains to him that Patralekha is angry at him for taking the decision to change his school without discussing it with her.

However, he assures Vinayak that he will get him admitted to the school and that his mother loves him a lot and can sometimes get strict with him for his own betterment.

Later, Savi arrives at Patralekha’s sent location when Virat sees Sai and is wondering about her when Patralekha arrives after.

Virat looks suspicious seeing them together.

Meanwhile, Bhavani tells Ashwini that she is happy about Patralekha’s anger because this shows that she has realised her mistake in bringing Sai back into their life.

She hopes that Patralekha in her anger finds a solution to this problem and throws Sai and Savi out of their life.

In the meantime, Patralekha and Sai are discussing Virat’s decision about the children's school.

Patralekha tells Sai that she has a problem with Virat’s decision while Sai tells her that she has already predicted the outcome and does not want children to go to the same school because it will force them together often.

Patralekha tells her that Virat cannot ignore his family in order to be a good father to Savi and cannot put Vinayak's life to ruin by taking him out of an excellent school to put her in a mediocre one.

On being asked, Patralekha tells Sai that the only solution to this problem is that Sai goes back to Kankauli with Savi.

© Copyright tellybest.com, 2022, 2023. All Rights Reserved. Unauthorized use and/or duplication of any material from tellybest.com without written permission is strictly prohibited.
Cached Saved on: Saturday 26th of November 2022 11:29:20 PMCached Disp on: Tuesday 6th of December 2022 12:50:24 PM