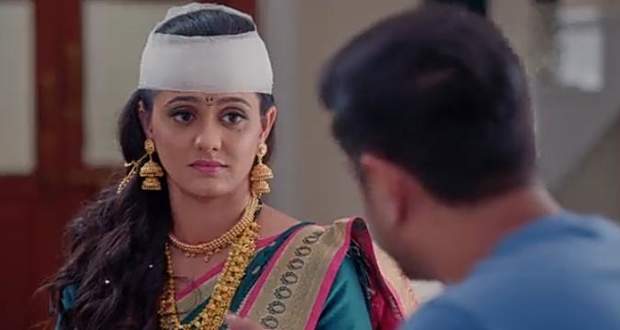 Today's Ghum Hai Kisi Ke Pyaar Mein (GHKKPM) 26 October 2021 episode starts with Bhavani telling the priest that Sai and Virat will do the last aarti while Vaishali tells Pakhi that the Chavan family is not doing right with her.

Everyone goes out to do the Visarjan and Omkar taunts Sai but she turns it into a positive remark after which all the members whisper their wishes into the Ganesh idol's ears and complete the Visarjan.

Pakhi gets upset and thinks that her importance is getting less in the Chavan family.

Pakhi complaints to Vaishali and informs her about Sai and Virat living separately from now on as per Ashwini's orders.

At night, Virat imagined Sai and later thinks of Sai as an illusion when she comes to his room which makes her think that he is joking with her.

Further, he gets shocked realising that she is there and feels happy while Sai thinks that he is irritated by her.

She tells him that she is habituated to his room and he asks her if she is going to stay in the same room as him.

© Copyright tellybest.com, 2020, 2021. All Rights Reserved. Unauthorized use and/or duplication of any material from tellybest.com without written permission is strictly prohibited.
Cached Saved on: Wednesday 19th of January 2022 02:00:52 PM