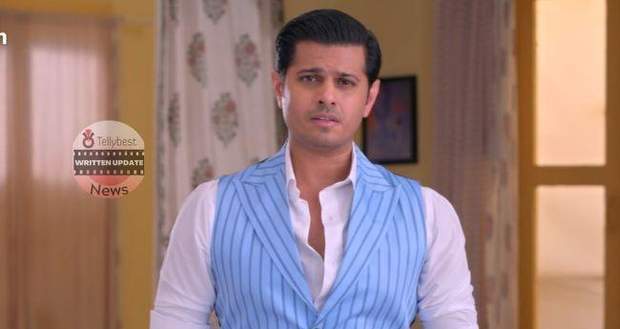 Vinayak praises Savi while Bhavani calls this Sai’s tactics to get attention.

Just then, the program begins and the host introduces all the chief guests and praises the Chavan and Joshi families for their bravery in saving the children and catching the gang of child traffickers.

Later, the host invites Savi, Sai, Vinayak and Virat onto the stage to get the medals.

Savi requests to say something before receiving the medal.

Later, Savi in her innocence tells about not knowing about her father and the hours and days that she spent waiting for him.

She also tells Virat that she wants to adopt him as her father just like Virat has adopted Vinayak.

All the Chavan are shocked to hear Savi’s declaration while Savi continues to read a letter aloud.

Virat feels his heart-piercing hearing longingness in Savi’s voice for a father.

Meanwhile, Savi constantly asks Virat to become her father and she will be a good daughter to him and will not ask him for toys.

Sai is equally shocked at Savi’s unpredictable demand and asks Savi to cut it out.

However, Savi tells her to not come in between and let her talk to Virat.

Virat looks helplessly at Savi while everyone listens to Savi in shocked silence.

Just then the audience starts telling Virat to say yes.

Sai gets annoyed at the request and tells Savi to come with her and apologises for Savi’s behaviour.

Seeing the reporters hound Patralekha, Sai gets angry and tells everyone that Savi is a child but they should not act childishly and carries Savi in her arms and leaves the stage and later the venue.

Sai is feeling humiliated and angry at Savi and her circumstances which have forced her into a position of weakness.

Outside the venue, Sai scolds Savi for talking so boldly about adopting a father and that too in front of the whole media.

She asks Savi to tell her if she is not good enough for her and if she does not love her that she needs a father.

Usha tries to calm Sai but she is furious with Savi and continues to scold her for doing and saying anything that she feels like.

Savi in her innocence continues to ask Sai about Virat not becoming her father who is so good and loves Vinayak so much and in the same way, he will love her too.

However, Sai tells her that it is not possible and tells Savi to not talk about this matter anymore.

However, Savi still asks Sai to make Virat her father which angers Sai and she gets off the rickshaw and tells Usha to go home.

© Copyright tellybest.com, 2022, 2023. All Rights Reserved. Unauthorized use and/or duplication of any material from tellybest.com without written permission is strictly prohibited.
Cached Saved on: Monday 21st of November 2022 01:23:13 AMCached Disp on: Thursday 1st of December 2022 12:51:14 PM