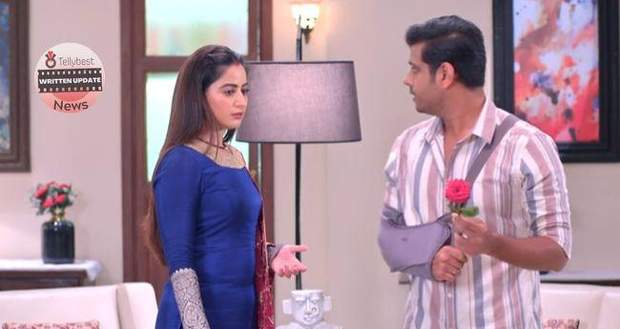 Today's Ghum Hai Kisi Ke Pyar Mein 26th September 2022 episode starts with Ashwini wiping her tears, deciding not to waste any more tears after Sai who is stone-hearted and uncaring of them and goes to Patralekha to comfort her.

Afterwards, Sonali blames Vinayak’s trip to Kathkauli for bringing Sai back into their life.

Meanwhile, Jagthap brings Savi to the trees where Savi becomes happy to see her message answered.

He also promises another surprise for Savi and takes her with him.

In the meantime, Bhavani agrees with Sonali and decides to delete Savi’s number from Vinayak’s phone.

On the other hand, Sai is waiting for Savi and Jagthap when Savi comes dressed in a police uniform and tells Usha about another surprise she received today.

Meanwhile, Ashwini comes to Patralekha to give her a birthday gift.

Elsewhere, Sai questions Jaghthap about the surprise and tells him never again to think of crossing the line of her house.

Jagthap tells her to cool down and stop controlling Savi and let her meet her father as she is in deep pain and longing for her father.

Seeing the gift, Patralekha tells Ashwini that she understands her purpose for coming here and asks her to say whatever is in her heart.

On being asked, Patralekha tells her that she tried to talk to Sai but couldn’t.

However, Ashwini tells her that it is good that she didn't talk to Sai and she doesn’t need to worry as she will be only Virat’s wife and no one else.

Patralekha tells her that she has no fear of that score nor is she worried.

In the meantime, Jagthap tells Sai that he has answered Savi’s questions on the tree.

Seeing Sai angry, Jagthap tells her that he has a connection with Savi and he cannot bear to see her in pain and will go to great lengths just to make her happy.

Later, Jaghtap’s friend questions Jagthap's feelings for Sai and tells him that his tears are visible.

Vinayak requests Patralekha to not tell her while Bhavani insisted.

Seeing Patralekha input the password, Vinayak hurries to stop her and falls down the stairs and is taken to the hospital.

At the hospital, Vinayak asks Virat to call Sai so she can cure him.

Later, the doctor also suggests to Virat to call the doctor Vinayak is asking for as he feels motivated by her presence.

After a while, Bhavani blames Sai for being the cause of Vinayak's fall.

However, Virat blames Bhavani’s irrational behaviour with the child and warns her to be careful in future else he will not tolerate it again.

© Copyright tellybest.com, 2020, 2021. All Rights Reserved. Unauthorized use and/or duplication of any material from tellybest.com without written permission is strictly prohibited.
Cached Saved on: Saturday 1st of October 2022 09:23:10 PMCached Disp on: Monday 3rd of October 2022 08:24:29 PM