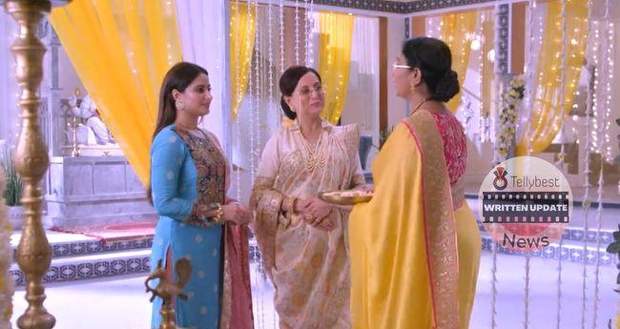 Pakhi gets uncomfortable and offers to go out but Virat asks Pakhi to stay and changes in the washroom.

Meanwhile, Sai makes Savi ready for Ganesh Chaturthi when a commotion of Bappa's arrival is heard and Savi happily joins the procession and dances.

In the Chavan House, Virat brings Lord Ganesha with Vinayak amid dance and hustle and bustle.

In Gadchiroli, a changed Jagthap is seen dancing with Savi while Usha and Sai appreciate his changed behaviour.

At the same time, Pakhi washes Virat's feet as he has Bappa in his hands while he remembers Sai doing the same in the past. Nostalgic feelings for Sai come back to him.

In Gadchiroli, Savi takes Bapa into her house and Sai does all the rituals of installing Bapa in the house and hails Lord Ganesha.

In the meanwhile, Bhavani asks Patralekha to start the pooja when Vinayak comes with the same Ganesha family idol as Savi. He accidentally drops Savi and Sai's photos from his bag.

Patralekha asks about the idol when Vinayak tells about his friend Savi who suggested him to keep Bappa with his family.

While standing, Vinayak is about to fall when Patralekha catches him and asks him to rest.

Meanwhile, Savi tells that she will learn everything fast as her father is coming soon as told by the tree and they will have a happy family soon.

In the Chavan House, when the lamp is flickering Virat keeps his hand taking Sai's name while it is Patralekha's hand in reality.

A tear drops from Pakhi's eyes while Virat apologizes.

Bappa's aarti takes place in Sai and Virat's house at the same time where Virat is lost while Patralekha looks at him with hopeful eyes.

Sonali and Omi have a comic element regarding the clapping in between while Karishma is busy on her phone.

Savi prays to Ganu Bappa to fulfil her only wish of bringing her father back while Usha questions Sai about what will she do if Virat returns to her life.

However, Sai is angry at Virat and says that Savi is only her daughter and she will never ever let Virat in her life because of whom she lost her son.

© Copyright tellybest.com, 2020, 2021. All Rights Reserved. Unauthorized use and/or duplication of any material from tellybest.com without written permission is strictly prohibited.
Cached Saved on: Sunday 2nd of October 2022 04:27:24 PMCached Disp on: Wednesday 5th of October 2022 05:34:38 PM