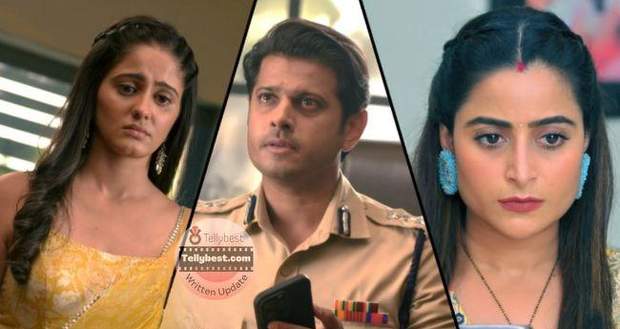 On being asked, Virat tells them that the woman could be his ex-wife and the child could be his.

He then asks about the rescue worker or any other thing they can recall.

They tell Virat the name of the rescue worker and the NGO he worked for.

Meanwhile, Sahiba (from the new serial Teri Meri Doriyaan) is talking to Sai and telling her that she is lying to herself if she thinks that she is not being affected by Virat being with Patralekha.

Later, Sai has a breakdown after sharing her tale with Sahiba.

She imagines Virat and Patralekha romancing each other and feels empty inside.

The next day, Patralekha is upset about sleeping at the night and not being able to spend time with him.

However, Virat tells her that for him her health is a priority and he cannot take it lightly.

Just then he gets a call and he leaves Patralekha with the medicine.

However, Vinayak observes Sai’s swollen eyes and asks her if she has been crying.

Later, Vinayak looks after her and tells her that she is like a mother to him which reminds her of her Vinayak who would be of the same age as Vinayak.

Later, Virat finds another leed while talking to the rescue worker Abhimanyu Kothari.

After a while, Virat returns to his room to find Patralekha in pain and the medicine box dumped in the dustbin.

Virat gets angry at Patralekha and tells her that her health is precious to him and he cannot let her miss any dose.

However, Patralekha tells him that the medicine makes her sleep and she does not want to miss a single moment with him.

Virat feels agitated at Patralekha’s stubbornness and tells her that she will have to be healthy to live with him.

Later, he calls Pulkit to update him about Patralekha and asks him if it is ok to miss a dose.

Pulkit suggests bringing Patralekha back as they will have to run some tests on her.

Patralekha is disappointed at cutting short the visit.

Later, Patralekha cribs about Virat being busy at work while Virat stops the car to have lunch together.

However, they both become shocked to hear Vinayak’s voice coming from the same Dhaba (restaurant).

© Copyright tellybest.com, 2022, 2023. All Rights Reserved. Unauthorized use and/or duplication of any material from tellybest.com without written permission is strictly prohibited.
Cached Saved on: Wednesday 25th of January 2023 10:37:43 AMCached Disp on: Thursday 9th of February 2023 05:49:01 AM