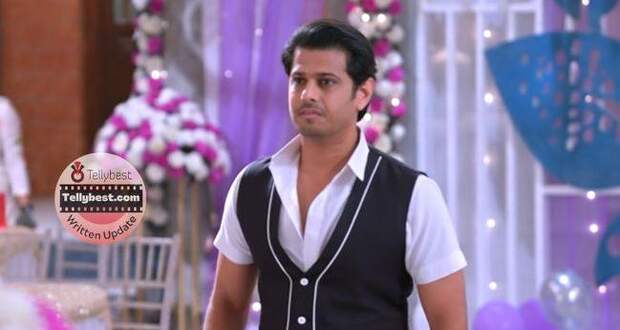 Today's Ghum Hai Kisi Ke Pyar Mein 27th January 2023 episode starts with Virat telling everyone that Patralekha is not in her room and her passport is also missing.

Sai gets worried thinking if Patralekha has gone with Vinayak without telling them.

Bhavani says what everyone feared, stating that Patralekha ran away with Vinayak.

Sai gets hysterical and accuses Virat of planning behind her back which is why he asked for time.

She tells him that Usha was sure that Virat will repeat history and support Patralekha but she did not listen to her and what she gets as a reward, is another betrayal.

She asks him why did he not think about her feelings before making Vinayak and Patralekha disappear and how could he stoop low.

Virat shuts Sai and tells her that he cannot even think of betraying her because he still loves. . .

Sai stops him in between and tells him to not feed her another lie.

Just then, Ninad stops them from fighting and tells them to think about where Patralekha must be taking Vinayak.

In the meantime, Vinayak asks Patralekha in the car why are they not home getting ready for the party.

Patralekha tells Vinayak that she will tell him a story that will answer all his questions.

Later, Patralekha tells Vinayak about a kingdom that was attacked by a witch who hypnotizes everyone into liking her.

After a while, that witch tries to hypnotize the Queen so that the Queen gives her son to her but the Queen's love for her son is so powerful that the witch’s spell did not work on her and she took her son and left the kingdom to save herself and her son from the witch.

Meanwhile, Virat instructs his team to cease Patralekha and Vinayak wherever they are seen and keep the case low profile.

Just then Sai once again comes to him and tells him to stop playacting when it was his plan all along to send Patralekha and Vinayak away.

Virat looks at her in shock and tells her that she is filled with hatred against him, assuming the worst.

However, Sai shouts at him telling him that he must have told Patralekha about it and she ran away after that.

Meanwhile, Virat tells her that he hadn’t told Patralekha anything because he couldn’t get the courage or opportunity yet.

Sai refuses to believe him and tells Virat that once again he has favored Patralekha over her and sent Vinayak away with her so that he can deprive her of her child just as he had done in the past.

She tells him that she will not let this pass and will punish him for betraying her again.

Meanwhile, Patralekha tells Vinayak to always listen to his mother just like the prince did in the story.

After that, she tells him that they are going to London and will party there.

Vinayak gets sad to hear that but pretends to be excited about Patralekha’s sake.

Elsewhere, Bhavani and other Chavan are praying for Vinayak’s safety while Bhavani regrets not knowing Vinayak to be her flesh and blood and being punished for that.

Bhavani requests God to send Patralekha and Vinayak back into this house.

Meanwhile, Sonali reminds Bhavani of the past when one daughter-in-law of this house took Vinayak away and met with an accident and the same can happen with Patralekha and Vinayak.

Virat tells Sonali to not talk like that but Bhavani scolds him saying that Sonali is not saying anything wrong.

She also questions Virat for telling Patralekha before them about Vinayak and if he has no love and loyalty towards them.

Meanwhile, Patralekha's car gets out of control and they are about to collide with the truck coming from another side.

© Copyright tellybest.com, 2022, 2023. All Rights Reserved. Unauthorized use and/or duplication of any material from tellybest.com without written permission is strictly prohibited.
Cached Saved on: Friday 27th of January 2023 11:58:45 PMCached Disp on: Thursday 2nd of February 2023 07:33:49 PM