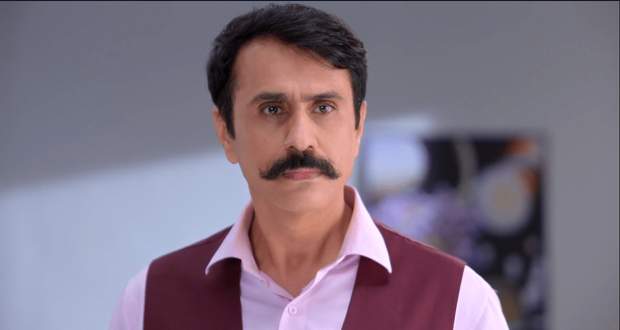 Sai looks at him with shock while Virat handcuffs her and escorts her out of the hospital.

At the police station, Sai looks at her surrounding in the lockup and cries with remorse and injustice.

Meanwhile, Bhavani taunts Ashwini for letting Sai sleep while Ashwini informs her that Sai has not returned yet.

Later, Ashwini defends Sai when all the members mock Sai once again.

At the police station, Virat explains his situation to Sai while Sai tells him that she must have done something wrong.

Virat assures her that he will do everything in his power to prove her innocence.

Samrat gets a call from Virat who asks him to come to the police station with the lawyer as Sai is in jail and instructs him to not tell anyone at home.

However, Patralekha overhears Samrat while Samrat asks her to be quiet about it.

At the police station, Jagtap comes as Malhar’s relative to stop Sai’s bail.

Sai is shocked to see Jagtap out of the jail.

Meanwhile, Patralekha tells Bhavani about Sai being in jail which makes Ashwini worried.

Bhavani once again gets angry and worried about the reputation of the family due to Sai.

Without knowing the reason for Sai’s arrest, Bhavani berates Ashwini about Sai and keeps calling her names.

After a while, Bhavani stops everyone from going to the police station and not making a scandal about it.

Jagtap talks vulgarly with Sai which makes Virat angry and he threatens Jagtap but Bhao comes in accusing him of not doing his duty.

Samrat stops Virat from reacting while Jagtap talks to Sai.

Sai gets angry and holds his collar but Virat asks her to leave him.

Virat points to Bhao and tells Jagtap that he is out and alive due to people like him which amuses Jagtap.

Jagtap tells Virat that he will not let Sai get bail today.

On being asked about his status, Jagtap tells Virat that he is Malhar Shinde’s brother which shocks everyone.

He tells Virat to make a charge sheet against Sai.