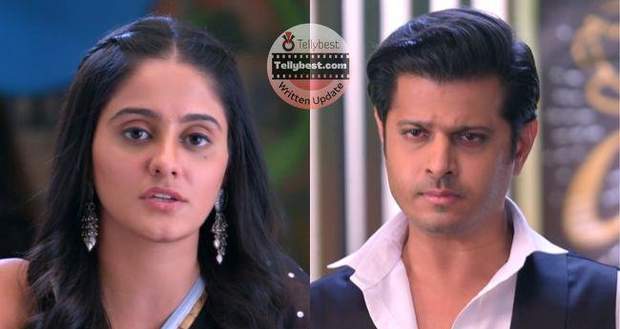 Today's Ghum Hai Kisi Ke Pyar Mein 27th November 2022 episode starts with Patralekha telling Sai to return to Kankauli as they were living peacefully when they did not know that she is alive.

Seeing Sai feel angry, Patralekha explains to her that when they were living in different cities things were simple.

She also tells her that Virat will continue to meddle in Savi’s life and will have arguments from time to time with each other.

Patralekha tells her that she will help her in any way she wants and can support her financially as well.

Meanwhile, Sai calls Patralekha selfish reminding her that she is the one who has begged her to come to Nagpur to treat her son.

Being sad Sai tells her that she did not think once about her daughter and came here to treat Vinayak but now that Savi has gotten to know Virat and her family and is happy living in Nagpur she wants her to leave.

Patralekha tells her that knowing that Savi is Virat’s daughter has complicated things and will affect Savi and Virat both.

She tells her about the consequences of living in Nagpur where Savi will sooner or later find out about her relationship with Virat.

Patralekha once again emphasises her leaving Nagpur and that she will help her in any way possible and will take care of her expenses too.

Sai gets offended by Patralekha’s offer of money and tells her that she is a doctor and is capable of taking care of her daughter’s expenses.

Sai reminds her that she has promised Virat that she will never leave Nagpur.

Patralekha mocks the word promise and how Virat has broken so many promises to both of them from time to time.

She asks Sai to break her promise for Savi’s better future while Sai agrees with Patralekha and tells her that they should stay at their places to maintain the balance in their life.

Meanwhile, Patralekha looks happy and tells Sai that they would have been best friends in a different world.

Just then Sai spots Virat and looks surprised while Patralekha is shocked to see him.

Virat drags Sai out of the restaurant while Patralekha follows behind them.

Virat warns Sai telling her that if she dares to take Savi away from him then he will tell Savi the truth about being his real father and then Savi will hate her for keeping her away from her father.

Patralekha tries to intervene but Virat stops her saying that he will deal with her at home, not in front of some stranger.

Later, Vinayak expresses his surprise to see Patralekha and asks her what she has been doing here while Virat tells him that his mother was planning a surprise for him but got surprised herself.

Meanwhile, Sai is hurt by Virat’s stern warning and being called a stranger.

At a deserted construction site, Sai begins to throw bricks on the wall venting her anger at Virat for saying hurtful things to her.

Just then Virat comes out of the blue and holds Sai’s hand.

Sai yells at him for talking about taking Savi away from her and hurting her with his words.

She regrets coming to Nagpur at Virat's wife's insistence to treat his son.